So on Tuesday I had rather a lot of energy for some reason and decided to finish two dresses I’ve had lying round for a while.

The first was using simplicity 2886, which is a fairly unprepossessing pattern, except that I’d google image searched it,and seen some rather pretty versions of it on the internet, and it was exactly what I was after.

The idea for this dress started when I went on a trip to Camden Market a couple of months ago, looking for a winter coat. I didn’t find anything, which is not really surprising given I’m a size 18/20, vintage doesn’t go that large and neither do the Camden Market brands. But it was slightly upsetting at the time. Especially as I completely fell in love with Hell bunny dresses, which I’ve since discovered go up to a size 22 online, (which is going to cost me money) but barely scraped up to a 16 in Camden… http://www.sohos.co.uk/Hell-Bunny-Dresses/prodlist_apbd35.htm?view=1&dir=0&order=1&size=100

Thing is…what makes those dresses is the gorgeous prints, the dresses are relatively simple, and as I had recently picked up this fabric… 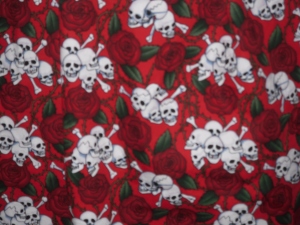 from Goldhawke road for £4 a meter, I decided to make something  Hell Bunny inspired! It was vaguely meant to be for Haloween except I was far too ill the couple of weeks before to sew, so its only just finished now!

I think it came out reasonably well…. 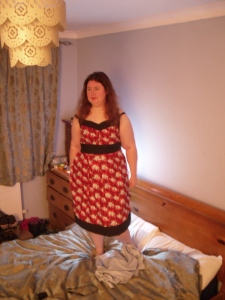 The pattern was easy to make and I’d use it again….Halfway through I though I’d made a massive mistake when I lost a lot of width on the bodice because I’d been slightly sloppy in lining each individual layer up properly. However there was plenty of room in the pattern, so when it came to trying it on it fit perfectly.

Inspired by having been overly pessimistic about the fit, I turned to tackling the saddest unfinished piece in my collection…Simplicity 3331 from 1940 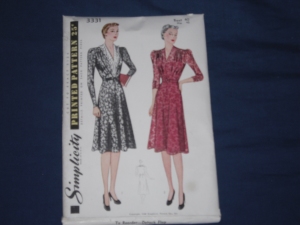 I loved this pattern, i think its so elegant, and according to the instructions on the back of the pattern it has a 40 inch bust and a 34 inch waist, which was perfect, as I’m not good enough at patterns to start scaling about something that old, especially with a pointy shaped waist detail.

As it was my first time at using a 1940’s pattern I decided to use the cheapest appropriate fabric I could find, which was this really soft, dark green almost denim style fabric from Birmingham Rag Market, that I got for 50p a meter.

It was extremely easy to sew, even the pointy waist detail came out a lot better than I hoped, and I got as far as having finished the skirt and the bodice, I hadn’t added the sleeves or the side zip yet and I thought I better try it on.And very quickly realised it was going to be such a tight fit I’d better not attempt it without my boyfriend around to get me out if I got stuck. And I had the major suspicion that if it was that tight it wasn’t going to fit at all!

So I left it unfinished for about 3 months, hoping that in the meantime I’d loose weight (a change of medication means I thought I was going to quite quickly, but then there were complications). Until tuesday when I decided to finish it anyway, partly for the sake of it, and partly because I had been so sure my other dress wouldn’t fit and then it did, that I was hoping for a miracle! 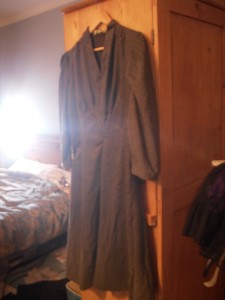 Obvioulsy it didn’t fit! 😦 It is nearly there….its about a full dress size too small I reckon. First thing I checked when it wasn’t fitting right was the seam allowances on the pattern, which I know can be a problem for 1940’s dresses. They were definitely on there. It was the worst fit around the middle. the top was actually fine, even though it had a lot less ease in it than I’m used to, but I think may be they measured where the waist lies in a different place to where we do on a garment. I always measure just below the smallest part of my waist, and assume that my stomach will be slightly bigger that my was it size. But the dress really didn’t fit on the stomach…it assumed you had a 34″ stomach, as well as a 34″ waist or something. I wonder maybe if its to do with the underwear they wore back then.

Unfortunately, although the pattern has loads of instructions on how to lengthen various bits in order to make it fit, there is nothing about taking it out at all. Which given the bodice bits are all cut at angles is totally beyond me. So I am going to wait,and hopefully in a few months I will have actually lost  a bit of weight and then I will make lots of them, cuz actually (although its difficult to see in that photo…apologies) it is the most gorgeous period style dress ever.