So we bought our flat two years ago, and found rather quickly that the walls, which are made of two layers of very dense 70’s brick, really didn’t like having holes drilled into them.

We got the builder when we moved in to put some hooks up for pictures and mirrors and things, but as we settled in we tried to put some up ourselves using our black and decker drill and couldn’t get more than a couple of centimetres into the wall.

So we spent the past two years, firstly waiting for a friend to lend us her masonry drill, which never happened, and then saving up to buy one ourselves, until it was pointed out by my dad that , given we don’t intend to stay here forever anyway, and given the sort of drill we’d need to make any kind of dent in the walls would cost over £200, and given we don’t have that many framed pictures to go up at the moment, it really is bad value for money to buy one. And apparently blue tack doesn’t damage the wall if you take the residue off using nail varnish remover, so its a far better idea to use posters.

This has been a bit of a poser. Somewhere in my parents attic, waiting to be rescued next time I go to see them, are all my posters from when I was a teenager, a few of them are still cool, a lot of them just scream 18 year old. And I think thats the problem with posters in general. We haven’t had any on the walls in 8 years, everywhere we’ve lived, be it rental or bought we’ve used framed pictures. And thats what I was planning for this place, I was on the lookout for gold baroque looking picture frames from local charity shops, ready to fill with incongruous images of pop culture figures and photographs of twisted tangled branches, preferably both at once. I’m not really in the headspace for posters anymore.

We had a good look on the internet anyway, I think if I’d been buying/stealing posters regularly for the past 8 years, and had loads to collage everywhere all over the walls, I’d be a bit more up for band or film posters. I mean we really like music, but if you just buy two or three, thats kind of defining your taste in music and your taste in art publicly a bit more than I feel comfortable with. I always over think things, but to me for example, a lone Manics Street Preachers or Suede poster says ‘I was 17 in the 90’s’ whilst a Lady Gaga poster kind of says ‘I’m not 17 now, but I’m going to pretend I am’.

Hopefully over time, we will organically get posters of things we are into and build them up into a mass of images, and then maybe we can fill our walls and still look cool.

However for the moment, we decided, after several hours of browsing that the immediate problem of filling our walls wasn’t going to be solved by buying a personality off the internet. But we still really need something, every time I take a picture of our flat, I am totally struck by how plain it looks and slightly dingy with endless ikea book shelves and then nothing. So I decided to make some.

Coincidentally I have a couple of new iPhone photo apps that needed playing with. 🙂

So I created these photos…… 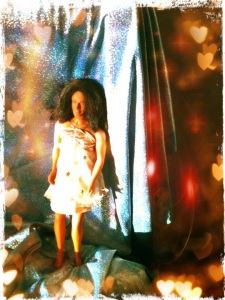 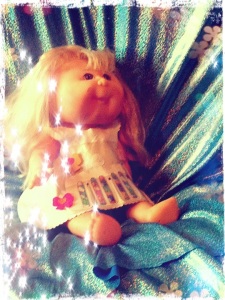 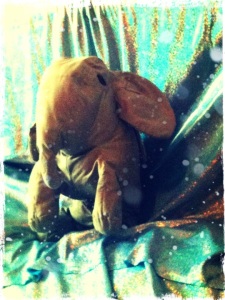 yeah, ok they are of our toy collection, but they are for our bedroom, which has a lot of wooden furniture and a fairly old fashioned, and matching(!) bedspread and curtains, and desperately needs glamming up.

I am hoping to get them all on the walls as A3 posters, with one A2 sized one to fit a particular space, however the online printing company I am using thinks they are too low resolution, so I have sent one off for a test print to see what happens.

If they don’t work I will make some more along a similar line.

I can’t wait. Its a so much cooler, and cheaper, way of decorating the walls than buying loads of commercial posters I wasn’t massively happy with anyway.

BTW Photos are copyright to me and anyone attempting to use them without my permission will be in trouble!

So on Saturday, Jon and I got up ridiculously early and went to Brighton, where I took part in a sewing meet up, with a load of lovely people I’d never met before, as shown in the photo above, taken by a lady called Claire.

I’m really sorry to any of the ladies from the meet up that finds this, I’m not able to tag everyone in the photo, as I find the tagging function on wordpress fairly baffling, and I am rather run down today, so I’m concentrating on getting something published rather than it being particularly something good! 🙂

Anyways,we went to a restaurant,and swapped sewing stuff, I got rid of loads of  stuff I didn’t need to very good new homes and acquired some stuff for myself….

this flowery and leopard print and black silky fabric is absolutely gorgeous. I had a few ideas what to do with it, but as soon as Jon saw it, he was all ‘sexy nighty’, so that was that! Luckily I have a 1930’s vintage slip pattern that will do perfectly already in my collection. Its far too nice of course to just wear in bed and not show off in public, when I was a teenager I used to do the whole Courtney Love, wear a nightie as a dress with a skinny t-shirt underneath thing, so I may have to revisit that look!

I got this sewing magazine, with how to make a sock monkey in it! 🙂 I like sock monkeys, so I am glad to get hold of a pattern for one.

I also acquired this gorgeous vogue pattern from the 60’s for an amazing looking suit.

After lunch, I shot off early as we were aiming to go to Jon’s brother’s birthday in the evening and it was already 3pm. Popped into Ditto Fabrics, partly just to have a browse, but mainly to check out a couple of things I’d seen online and rather liked the look of. I am never going to make the mistake of buying stuff that isn’t cotton online without getting a sample or checking it out in person ever again! 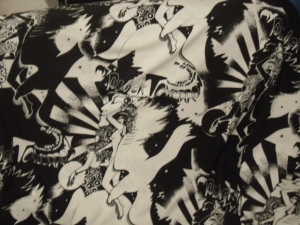 which was as nice as I’d hoped it would be. If you look really closely it has naked ladies all over it! 🙂 It also has writing saying ‘Black Tomorrow, recorded on Parlephone’  Having googled Black Tomorrow, there are a couple of bands called that, but they are all really small and modern, certainly not important enough to have their own psychedelic t-shirt fabric. Was wondering if any of the music experts I know would be able to shed any more light?

Anyway, I am waiting for my sewaholic renfrew top pattern to turn up, and it will go nicely with that.

I looked at Ditto’s supply of coating, cuz I have a cape pattern I’m looking to use at some point, and I am so glad I didn’t buy online, as non of it was at all to my taste, the  duck egg blue I thought I liked was all hairy in real life. 🙂 But then I spotted this in the sale for £8 a meter……

it is wool fabric, and I thought it would be perfect for either my new suit pattern, or given that I think, having looked at the back of the packet, that  that one may be for a sewist who’s a bit more expert than me, the new simplicity mad men suit pattern.

I ended up buying 5 meters instead of 4 because that was what was left on the roll, and it was in two separate pieces so I wanted to be sure I had the right amount, hopefully that will give me a bit left over at the end for something else. 🙂

On the whole I think I was rather restrained!

Then before we went home, Jon, who had been trying out bass guitars at various shops whilst I was fabric shopping, took me to see one he really liked, that was massively reduced in price as it had a tiny chip in it, and generally a total bargain. So he bought it, which is a real relief as his old bass has a broken neck that has been repaired so many times, its just waiting for someone to drop it for there to be a disaster.

a bit of a crappy photo, but I was having massive problems with lighting. It is a black Ibanez Soundgear. Personally I think it is totally outshone by my Daisy Rock next to it, but I suppose its not bad looking for a bass, and it has a pretty dragon on the fretboard! 😛

In front is Jons new leopard print pedal bag, nicely decorated with the larger part of our badge collection. So rock and roll!

Anyway..we got back from Brighton according to schedule, the plan was to dump stuff at home and then go straight out again, but Jon had come down with a bit of a temperature, so we thought we’d better not go to his brothers party, which was just as well really as it started snowing and didn’t stop, and it would have been a nightmare getting back from Highgate in that sort of weather.

I was feeling quite smug cuz I’d paced myself all day so I was well enough to go out again, and Jon wasn’t, but then I’ve been mostly in bed yesterday and today, so meh!

I did get my tartan fabric washed and ironed over the weekend though, it is a total dream! I am now thinking it might not be wool, and may be the sort of cotton grunge style lumber shirts are made of or something. But it doesn’t really matter, it means the dress I make will be easy to care for anyway.

Hopefully I’ll be well enough in the next few days to get on with it!