Hadn’t realised it’s been an entire month since I posted on here, but actually I’ve been super busy and done quite a lot, its just taken till this week to collate it all together.

So started the month by trying to make some jam..

I haven’t done this for 3 years since we lived in Hitchin, but I want to make some onion marmalade at some point, I mean £2.50+ for a piddley little jar at tesco – rip off! And Lewisham market had peaches for £1 for about 1.5kg, so I bought £3 worth and had a play. Well its very nice tinned fruit! And my biggest jam pan does not take 4.5kg of fruit, which is good to know, but meant I couldn’t boil it enough to set it properly else it would over boil. Oh well, it was my first attempt in years, and it goes very nicely with yoghurt and ice cream! :-S

Then I spent two days trying to dye my hair purple and burgundy. So I’ve been having problems with hair dye for ages, salon and home permanent colour washes out in about 3 weeks so I thought I’d give La Riche Directions ones a go as someone said they were better. 2 days and many hours wandering round with my head covered in dye later, this happened….

and lasted for all of 3 days/2 washes. Which was most irritating, so now my hair is back to the manky faded red it usually is. Oh well!

Then things got a bit more successful and I made a top…. 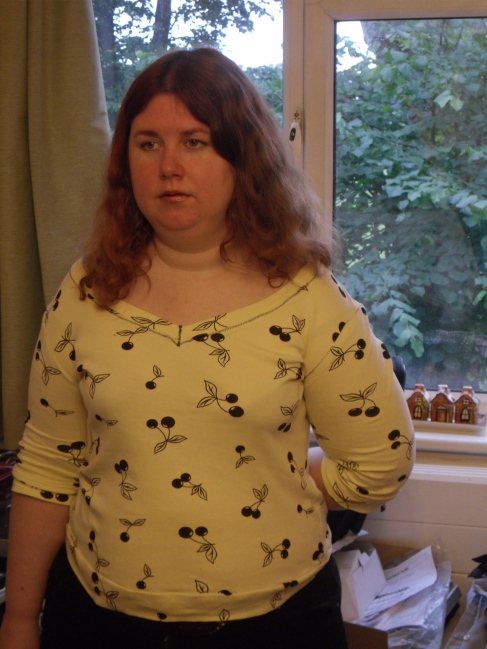 It is another Sewaholic Renfrew top, and in loads of ways is my most successful so far, I got a sensible looking neckline this time, except the jersey I used, although really pretty was £3 a meter off Goldhawke Road and was stretchy as anything and stretched like mad as I was sewing, as it has mostly cleared up with a go in the washing machine, I am taking a lot of the responsibility 😦 and must remember to actually wash fabric before i sew with it! But the neck being so wide after I’d totally nailed the technique for getting the neckline even is totally annoying!

Then last week I went to my mums and hit the charity shops in one of the small country towns nearby. Countryside charity shopping is the best! Especially pet charities and hospice shops where they don’t make a habit of sending choice vintage down to London to make more money.

So in the first shop I went to I got this…

A totally amazing 80’s prom dress for £6! Not sure if it’ll fit yet, despite having been back 5 days I’ve barely seen Jon and I need him to be around when I try it on incase it doesn’t! If it doesn’t I will chop the skirt off and use that and not the top or something.

In the second shop i found this…

A really cool vintage hand mirror. Was really happy to find this as it was cheap, is not scratched or pitted at all and was actually on my list of things to buy this month. (realised I needed one whilst trying to dye my hair.)

And then last of all I found this beauty…. 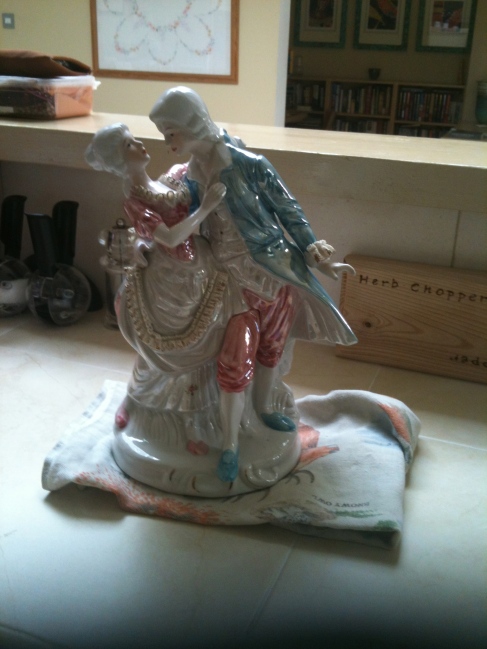 Now every one else thinks its hideous, and true it was made in bits rather than one piece and doesn’t have a makers mark, so it obviously came form a fairground or woolworths at the time, but its all iridescent an pearlescent and pink!!! And it is sooo big, its not obvious from the picture, but its the size of a Barbie and Ken! And the features and the way its carved is done so well for something that bad quality, that until you see its jointed not whole it looks a lot better than it is.

It is still at my mums at the moment as I couldn’t carry everything back, but I can’t wait to get it home and I know exactly where its going to go! 🙂

This month I have to take some medication I am not overly keen on, so may be suffering a little from side effects of it. However I have 4 new sewing patterns and an endless stack of Renfrews to get through, so hopefully the ill will let up long enough for me to do stuff! 🙂