So it all started when I was wandering about the West End and was stupid enough to go into Miss Selfridges and see this dress, which is actually much prettier in real life than on the webpage, but sadly only went up to size 14, which was most distressing.

So I thought about it for a few days and then went down to Rolls and Rems in Lewisham and bought what they had left of sheer black swiss dot fabric, which happened to be 4 1/2 meters in order to have a go at making my own and very quickly realised that was no way enough fabric for a maxi dress…

Now I gave up on this one about 18 months ago when I made a muslin that went horrendously wrong and I couldn’t work out what the hell it was I’d done. But it looked absolutely perfect for what I was after and only used 4 5/8 fabric at 40″ which was perfect as I have about that of 60″ to play with. well done 40’s austerity there!

So I thought I’d have a seccond go at a muslin of the short version and see what happened.

With hindsight part of what went wrong last time is I added a load of extra to scale it up as it was designed for a 32″ waist, I’m 34 or 35″ and I had just finished with a 40’s 34″ waist pattern by the same company that had come out horribly small, so I assumed this would have the same problem. I ended up having to take all the extra ease back out again and it came out a right mess.

So this time I actually measured the top of the skirt panels and added it all up before I started to see what it came to, and was highly surprised to find it was 40″! So even given there were 6 pieces all needing seams, I couldn’t see how that wouldn’t fit as it was. So i left the pattern alone and cut the pieces the correct size, the only modification I made was to add half an inch on each side at the back in order to move the side zip ( I hate them!) to the centre back, so I stood a chance of getting in and out of it myself.

And it worked, totally easy to sew up, took me two afternoons, and fits like a glove.

Obviously it being new clothes I wanted to wear it out immediately, and this is the bit I messed up on, I thought 40’s with red and black strawberry print, thats very pin up girl/vintage glamorous and I was going to see Rachel Stamp ,a glam band who used to be big in the 90’s play the Nambucca on Holloway Road the next night, so thought it was a good idea to wear the new dress. And then spent the whole evening feeling I looked a bit wrong, but couldn’t put my finger on why (though the gig was totally awesome!).

Then last week I was up at my mums for her coffee morning ladies xmas lunch (don’t ask!) and brought the dress to show my mum what I’d been up to and was immediately talked into wearing it at the lunch in a posh cotswold hotel and I got loads of compliments on it.

My mum took these pictures of me in it afterwards… 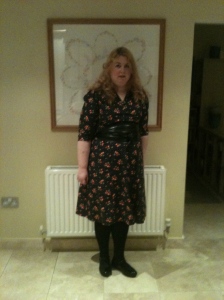 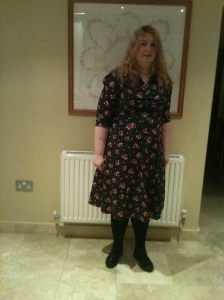 And yes it is very appropriate for a day in the Cotswolds!

So that is something I never knew. The problem is, when looking up ideas from other blogs and online stores one has to remember that the vast majority, with a couple of notable exceptions of the girls you see, specially the ones doing vintage are all about half my weight so something that looks edgy and rebellious on them looks very respectable on me!

I will probably at some point make the long see through version of the dress as planned, and it has not totally put me off vintage patterns, though perhaps 1940’s ones at my current weight. And I suppose it is a good thing to have some really normal day dresses in my wardrobe. But if I’m going for a new pattern style I think I will look for pictures on the internet of someone with a larger figure wearing it a bit more carefully in future!

Anyway…heres a picture of our xmas decorations to be a bit seasonal! I shan’t be sewing till after christmas as they have displaced my sewing machine from the table!

So once again its been a couple of weeks.

Anyway.I’ve been quite lazy, but I have actually made stuff….

First up another Renfrew Top I made a few weeks ago, and forgot to post about…it is made with jersey from Ditto Fabrics in Brighton, and is lovely and warm and pretty much spot on in terms of technique, and it is a bit of a weird one for me to wear clothes that look so normal, but the reason I’ve made millions of these this year is that all I wear all winter is layers involving long sleeved tops, so black does get a bit boring at times.

Bottom of the photo cut off as Jon took it with my mobile and didn’t move the case. Taken in Victoria Park, East London.

Then I made another Renfrew out of some fabric I got for £2 a meter off my favourite market stall. As it had a border print I aligned the top automatically with the border at the bottom, cuz any other way would look bloody weird frankly. I then proceeded to sew it up in my standard size, and then wondered why the hell it was a bit too small. Cuz the stretchy grain of the fabric is running up and down, not across isn’t it! I have got to say, that is something I never thought to check for, but yeah, that would be a problem with border printed jersey coming to think about it!

So thats why I’ve photographed it lying on the bed.  It does fit, it looks nice under things and ok with skirts that sit on my natural waist, but it does have a tendancy to ride up, and I certainly couldn’t put it over a base layer, which is what I’ve mostly been wearing given the freezing weather, so I couldn’t get a good photo of it on.

Also stuff I have done..today on the way to the supermarket I popped in at one of the local charity shops and found these little beauties…. 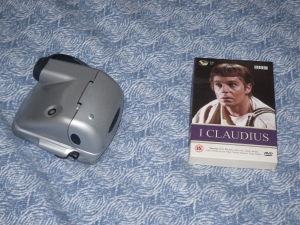 I’ve been after a dvd copy of I Claudius for ages, we recently disposed of our video copy, and I’ve wanted a polaroid camera for a while too. My little brother has one so I am going to find out from him where you get the bits from (hopefully), and if it doesn’t work, the camera was £2 the dvd £3 so who cares! 🙂

I have also taken custody of this gorgeous dress. 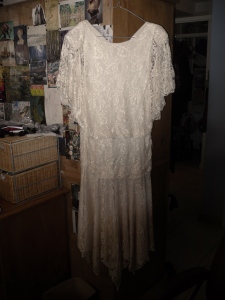 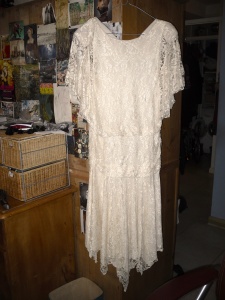 It is an ivory lace flapper dress, made by Berkertex, so 80’s pretending to be 20’s, and it is gorgeous! It has a small hole in the lace on the skirt, but apart from that seems in good nick. Only drawback is it is a size 14, and having tried to get it on, probably a small 14 at that, so completely doesn’t fit. So now I have to decide whether to put it in the drawer I reserve for stuff that doesn’t fit, or whether to dispose of it! Grr. It was very cheap though so it doesn’t matter that much.

I am also in the middle of a bit more major sewing project so I’d better head back to that!