top is self designed one I made ages ago. Skirt is my second attempt at the Sewaholic Hollyburn Skirt. And this time its come out perfectly. I was so worried after the disaster of the first one, but it turned out perfectly. I made it even harder for myself as I only had a meter of the fabric (£2 from market stall, isn’t it gorgeous!) and was determined to get a skirt out of it, despite the pattern suggesting you need considerably more if you are my size, so I cut the pocket pieces in half, roughly along the inside fold and sewed them back together as I was assembling the pockets.

I love the fabric though, it is a burnout/devore style fabric, with the top being black velvet and the base being some kind of thick grey jersey. It is very stretchy and so far the velvet bits have been impervious to being scuffed and put in the washing machine, which is often a problem with the cheaper of that sort of fabric.

New Look did a load of similar skirts this year, but for some bizarre reason they figured only people size 16 and smaller would want to wear them, so I am very glad to have had the opportunity to make my own (though slightly pissed off that I had to!)

Here are a couple of pictures where I faffed with the contrast to make the skirt pattern stand out more….

And here is a picture of the skirt laid out on my bed…. 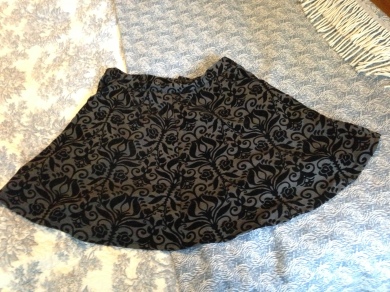 The other sewing project I did last week was a completely accidental one. I went to see Emilie Autumn, a goth/steampunk/cabaret act with my boyfriend and decided to dress lolita. 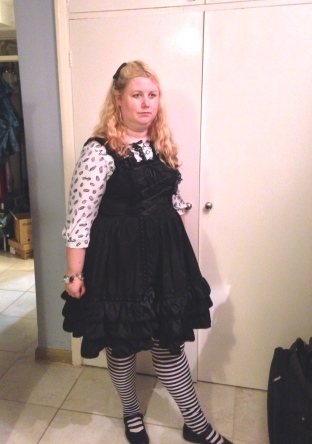 I’ve been waiting for an opportunity to wear this outfit for ages. Its my humbug top, my black Bodyline jsk and a pair of black and white stripy tights.  With hindsight and looking at the photos I think its a bit St Trinians, however those photos were taken after we got back, so not only was it midnight, but we had been enormously rained on as a torrential downpour had been going on all evening and so my hair was fairly wrecked and the skirt of the dress was soaked.

The tights however, are not all they seem from the outside….

I looked on the internet for a pair of plus sized black and white striped tights, which on the surface shouldn’t have been too difficult as all of the fancy dress shops carry them and there are loads on ebay and amazon. In the end I bought a pair of  2xl by leg avenue which purported to be large enough for someone my height and weight. When I opened them to put them on that morning (luckily I didn’t leave it till 5 minutes before the gig to get changed) they went about half way up my thighs and then stopped. I would say not recommended at all for anyone over 5’4″! As I paid £8 each for two pairs of these I was most pissed off.

I didn’t really have any other clothing options. I am dreadfully short on Steampunk/goth/clubbing clothes at the moment, so I didn’t have an alternative outfit planned. So I cut the tights off by the crotch (or about halfway up my thighs) and cut off a pair of normal black tights I knew would fit at roughly mid thigh length. I then sewed the stripy tights to the crotch of the normal tights, stretching out the nylon as I sewed so that the seam would fit round my leg. To my utter amazement it worked.

One side was a little prone to falling down and I had to keep pulling it up or it would show under my dress, and it wouldn’t be suitable for wearing with a much shorter skirt, but I have one succesful pair of frankentights! They’ve even survived the washing machine since.

Obviously if anyone knows a source of plus sized stripy tights that are actually likely to fit a 5’9″ size 18/20 without cannibalisation I’d be eternally grateful!

2 thoughts on “grey skirt and frankentights.”