So better extremely late than never….. a continuation of my account of the cool stuff I saw at the London Edge. The thing to remember is a lot of the coolest stuff is Autumn/Winter 2014 collections, so won’t be in the shops until August anyway. First up Golden Steampunk/Phaze, Gorgeous Steampunk gear and loads of Venetian Lace Masks, including bat shaped ones (although their prices are really reasonable I am kicking myself for not buying a lace mask when I was in Verona last year, I had already acquired 3 traditional ones, so didn’t bother, but they were basically the wholesale price over there! 😦 )

Contrariety Rose – this one was quite a small business which was quite nice to see, with two girls who handmade all their stuff in England. Really good quality 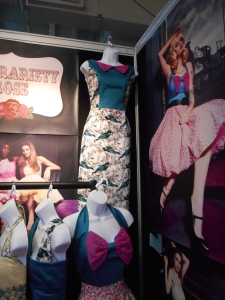 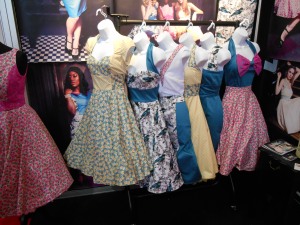 Hellbunny – this is the one point my filing system for photographs got a bit confused. What I did was take pictures of the sign for each stall before I took one of the clothes, however in this case I took a picture of the stall before Hellbunny, but didn’t take one of Hellbunny itself, so I am not 100% sure the black and red cameo dress is by them. It is also really confusing as Hellbunny is one of several brands made by the same manufacturer all of whom were sharing the same stall, so I am not quite sure which brand they are, however, as Hellbunny do not have a dedicated  online store or proper website (The link is to their Facebook) and you have to buy them through independent retailers, chances are if anything is technically a different brand, if you actually want to buy it, it’ll turn up in the same place!) 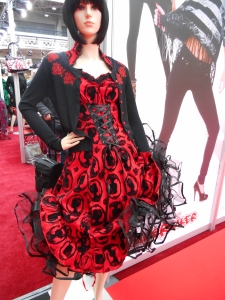 This is Vanity Project, another made in England business who make beautiful vintage clothing. Although I absolutely love their stuff, I am in two minds about this one, as they use publicly available Alexander Henry and Tula Pink fabric, as I do quite frequently when I make stuff for myself. However the reason I make stuff like that myself is I used to see Alexander Henry fabric dresses in Camden and covet them, but I’ve always been too poor and recently too fat to buy them. However lots of my friends like the sort of things I make and like vintage dresses in general and can afford to buy stuff like this, in which case will really like this company as their stuff is gorgeous and really well made! 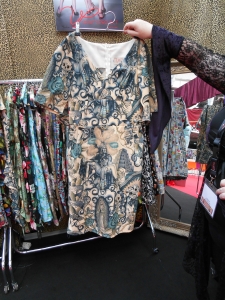 This was actually the stall that got me most excited in the whole of the exhibition. They are called Tecstyle ltd and they do custom fabric printing and will make stuff up into bedding for you. Their prices are comparable to Spoonflower, but they do a minimum of 15m. The stuff on display was really good quality and their black comes out reasonably true. I think if I ever went into making dresses commercially (the little issue of Chronic Fatigue to get over first) they would be exactly what I would be looking for as great though Spoonflower is, these guys are based in Britain, so no annoying shipping or customs issues. I also quite fancy my own custom duvet sets. 🙂

This is burleska.co.uk lots of awesome corsets, the majority with a steampunk feel…. I am rubbish at telling the quality of corsets, but these didn’t seem bad at all, and are quite reasonably priced too. 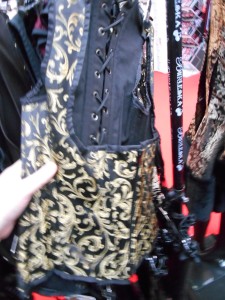 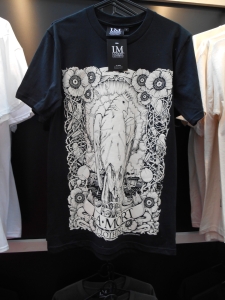 I really enjoyed our trip to the London Edge, I am not sure if I will do this again as although I try to update my blog as regularly as possible, the number of posts it takes to do this properly is somewhat tiring and I’m a little bit lazy! Also, you can’t buy stuff there, and you have to wait 6 months for a lot of it to hit the shops and I can’t afford lots of pretty gothic clothing anyway (hence the sewing). However it was really really interesting to see what is on offer, and what actually goes on there, as I’d heard about the London Edge for several years and was really curious. So now I know 🙂

I’ve actually been working on a dress for the past few weeks, and as this is a particularly complicated one that required a mock-up and I am trying to get the finish as damn near perfect as possible, it is taking me longer than normal. I am also slightly lethargic about it as I have had this one lined up for the best part of a year. I need to make it, it is a lolita-steampunk dress which is something I desperately need for clubbing, and I have a deadline for a friends hen party in a few weeks, so I actually have to get a move on now. However it is dragging a bit.

It also doesn’t help that I visited the local fabric stall for the first time in a while and she was just putting out a new batch of stock, so I went a bit mad….. 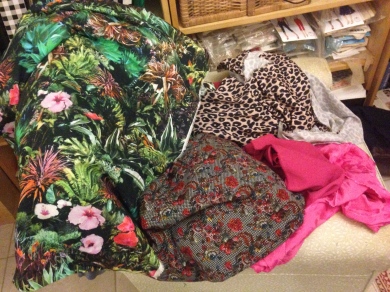 The Hawaiian print is 100% cotton, which is unusual for that stall, and I have 4m of normal cotton and 2m of cotton sateen. I am thinking another halter neck dress with this one, using the pink satin on the right as lining, and possibly a 50’s style blouse out of the sateen. The floral viscose at the front is bookmarked for Sewaholic’s Cambie Dress, the pattern for which arrived a couple of days ago. I think a slightly baroque version would be very nice, & the leopard print at the back is going to be a mock up of this dress from Butterick, designed by Gertie, who has basically one of the best sewing blogs on the internet. Having googled versions people have already done it looks far nicer when the ruched bit at the top is the same colour as the main part of the dress, and i think I have enough to do that, so it will be a very wearable mock up if it ends up fitting me, however it is another of those damn dresses with boning where you can’t really fit the bodice till you’ve finished it, so I will have to see.

Anyway, I have therefore got a little distracted and need to concentrate on the one I’m actually making, and then the 4 or so things after that I actually need to make before I get all excited and start making new shiny stuff.

However I have been feeling ill today so I haven’t got on with anything, apart from taking a selfie cuz I am feeling particularly stylish today….

Bow and long sleeved jersey top by myself, trousers m&s and wooly jumper from topshop. Bedroom is a bit of a mess, but is about to be redecorated.

Yeah, so theres no point in having clothes if you don’t look after them, so I better go and do a pile of ironing :-S

Final post about the London Edge is coming (if anyone is still interested) hopefully I’m a bit more organised next week!