So thats probably the longest I’ve gone without sewing something in the last 4 years, & frankly wasn’t very pleasant. I’d love to say I was better now, but I’ve been lying in bed going ouch for most of the hot weather, so probably not. However i was well enough for a week or so to finish this dress, which I’ve had lying around in my to do pile for the last 3 months at least….. 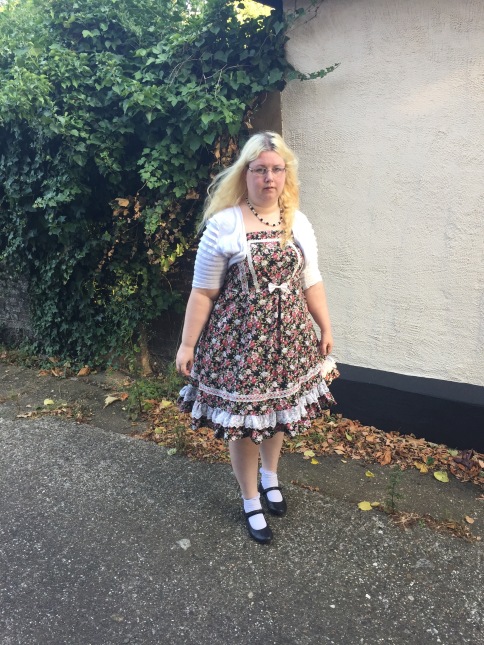 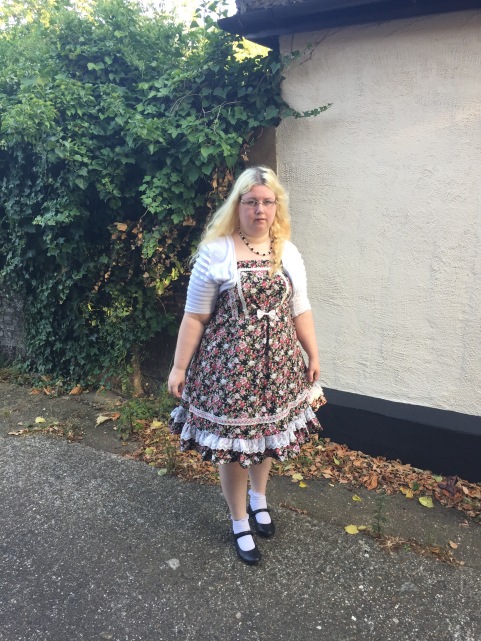 Its just a fairly basic classic lolita dress. I was getting majorly into the frilly in March when I cut this out but had zero money, so I decided to use stuff from my stash (plus extra lace) to make something basic that would fill a hole in my wardrobe, and take my mind of all the pretty things I couldn’t afford. Apart from one major crap-up, I am really rather pleased with how this one has turned out.

It is not shirred at the back, it has a zip, this is because I bought the fabric about 3 years ago when I was a lot worse at sewing and so only bought enough for the dress pattern (New Look 6457) plus widening the skirt and adding a frill. It is my aim that all future lolita dresses are shirred, but I thought after three years I’d better just be done with it and use the fabric rather than spend money I don’t have on new.

Now what I’m specially proud of with this one is the lace. I have struggled for years to get proper Far Eastern quality lace for an affordable price, its one of the things that put me off attempting to make lolita dresses for ages, is I couldn’t get hold of high enough quality stuff.

However in the last few months a load of sellers from Korea have popped up on eBay doing proper amazing quality lace for really reasonable prices and in bulk amounts. One of my favourites is laceking2013 who I found when looking for burgundy lace for my burgundy jersey top, he has since been picked up independently by a couple of the another lolita seamstresses on the internet, which proves he’s proper good. I got the rose lace I used on the bodice of this dress from him and actually wish I’d gone with him for the lace round the hem as well as although the stuff I used (from another eBay seller) is good quality and very soft, it was a bit more expensive and doesn’t like irons very much. 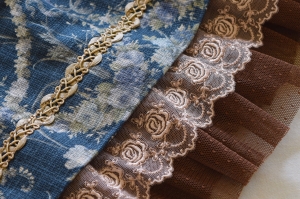 Obviously it actually looks nothing like, but that was the inspiration anyway.

So then…the massive cock up…..

So given the print I was using is so busy it was actually really hard to tell which way up it went, so I ended up sewing the main bodice panels to the chest band and the straps upside down. 😦 I kind of noticed something was wrong when I was pinning the chest band, as it was much wider than the bodice I was pinning it to, but I assumed it was cuz I’d used the size 20 pattern piece instead of the size 16 or something. Anyway, so I didn’t stop and go “hang on, somethings wrong here” like I should have done. Anyway I only worked out what I’d done after I had finished the bodice including loads of trim and sewn the skirt on. So I thought about it for a minute, tried the finished piece against me and decided to finish it anyway as I have quite a small chest and I usually have loads of surplus fabric when I come to set the zip in at the end, and usually I’m pushing it a bit tight on the waist,so it being upside down might not be too bad.

As it happens I think its worked out kind of ok, the zip had to be set lower than normal as the chest band didn’t quite stretch, and it pushes my tits down a bit making them look larger and a bit lower than they normally are, which is not great, but as they are fairly small to begin with considering my size, not the end of the world.

The thing I love about it though is what happened with the centre front. this needed taking in massively as it was far too loose and blousing out in a most unattractive way around the waist, so I just took a bow pin (off one of my lolita blouses) and pinned it together into a pleat, and I think it looks like a really cool like an intentional design feature. I haven’t sewn a bow on permanent as I think I will change which one I use depending on which colour I am co-ordinating the outfit with.

Which leads me to accessories, the co-ordinate I used for those pictures was fairly casual, for Hyper Japan (which this dress is fortuitously finished in time for) I will probably add my Muchacha Achachumu cat bag, as I don’t have a proper suitable lolita one at the moment (it is not actually lack of funds, I have an idea in my head of what I want and I just haven’t seen it on the second had sales comms yet). My disappointment is my bonnet, i have the most gorgeous burgundy Victorian Maiden bonnet with white lace that should go perfectly with the dress, but it looks horrific on me. Seriously I look like some moon faced 40 year old in it, it is so bad I’m not even going to post the photo of me in it. So sad as it is such a beautiful item. So I’m going  to make do with hair flowers, but at some point I need some nice hair accessories to go with the dress.

I could make some, but typically both my sewing machines have conked out simultaneously. The overlocker was loosing thread on one spool all the time and I couldn’t work out what I was doing wrong, but now I have and I just need to rethread it, but that takes energy, which I don’t really have at the moment. & my sewing machine, more worryingly has stopped picking up the thread from the bottom spool/started jamming every time I try to sew. Now several people have suggested the needle is bent and I need to change it, which again I don’t have the energy to do, but if that doesn’t work there is a proper problem with the machine and at the very least I will need a new spool case.

At the same time the heat seems to have kicked my ME off again so I’m sleeping rather than doing stuff. Anyway, hopefully I’ll have something productive to post sooner than it took me this time! 🙂