I completed this a couple of weeks ago before I went away, but the weather was so damn miserable that I didn’t fancy going outside in it to take photos let alone wear the dress, so I waited a week till last week when my boyfriend and I went with my parents & my brother to Sorrento in Italy. Which was a really good idea, as the weather over there was beautiful, so it was the perfect thing to wear.

Anyway. I first started working on this dress about March or April, but lack of inclination (largely due to the complete lack of summer this year) and illness got heavily in the way and I finished it a few weeks ago.  This was not only very fustrating, but the stop/start way in which I sewed, with only a couple of hours at a time, may have contributed to putting me off the pattern I used, which is a shame as the dress is gorgeous.

I used Sewaholics Cambie Dress pattern. I’d seen a fair few of these on the internet and thought it was so pretty, but although I have got on extremely well with a couple of her other patterns, I was very nervous at having a go at this one as I needed to scale the waist up by about 4 inches. Sewaholic patterns now make their patterns go up to a size 20 (my size) but at the time this one came out they only went up to a size 16. In the end it worked out perfectly, but I used a fairly stretchy fabric for both the main dress and the lining and it fits me exactly, so although I wrote down what I did to scale it up, I would be wary of  using those instructions again for a printed cotton or a normal lining fabric.

So yeah, aesthetically it has worked out really really well….. 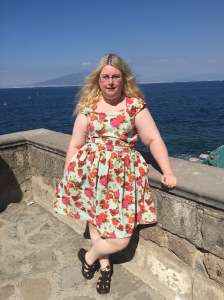 So well (with a little help from Italian sunlight) that we took loads of pictures of it. The lump in the background is Mount Vesuvius. 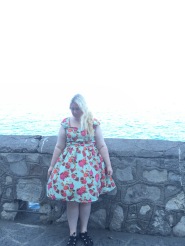 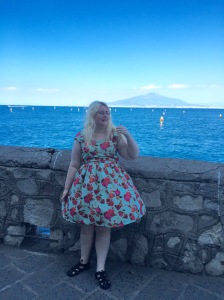 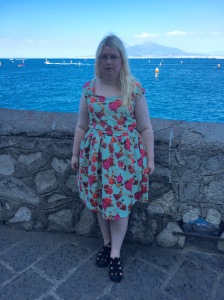 Pretty though it looks however, I’ve got to say, with the proviso that the disjointed way I sewed as I was ill made it seem like it took even longer than it did, this thing was a bastard to make.

For a start it is fully lined…

which looks beautiful, especially with the contrast waistband (which is part of the pattern) but essentially means you make the bloody thing twice.

which is not as bad as all that, even with attaching a lining to it (for which there are zero tutorials I could find on the internet. Loads for just the zip onto the front, one for a facing, but zero for a full lining!) It was my first attempt, & I think I’ve nailed it, but it took me three hours and two goes, not because putting in the zip was difficult, but because of what is actually my main problem with this dress, the sheer amount of inside out fabric you are heaving around with the dress and the lining (specially as I’m fat so this is two dress sizes larger than the largest intended version) makes it really really difficult to work out which seam is supposed to go where & I ended up with a moebius strip on two occasions.

I think I would find it a hell of a lot easier a second time, however this dress does take a long time, in comparison to other simpler sundresses, so I don’t think I’ll be rushing into making it again, despite the really professional finish you end up with.

Both fabrics I used, the crepe and the satin, were £2.50 a meter off my favourite market stall, & I love how they look, what I love even more, and means I’m going to get a lot of wear out of this , is the finished dress doesn’t need ironing! Ever! Even when its been rolled up in a suitcase for 2 days!

Leave you with a couple of bonus pictures of the windows of Valentino, and some other designer clothes shop (Either Moschino or D&G) on Capri, with £1000 dresses that one day I will find some kind of way of replicating. So pretty! 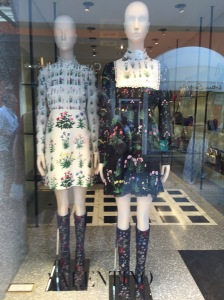