So this year for Halloween there was loads of stuff on in South East London, which is awesome because until a couple of years ago there was not really very much at all. So we decided to go to a gig at the Montague Arms an awesome venue/pub inbetween Peckham & New Cross. So someone from Jons work was going to be there, & younger cool people, & its Peckham so the dress code is kind of different from what I would normally wear for going out anyway (no one was going to appreciate ott victoriana goth)  so my theme this Halloween was Toning It Down.

Trying to concoct an outfit that looked like a person who dresses normally being spooky for the evening, rather than someone who sees an item of clothing and tries to work out where to add more lace, bows & skulls for everyday wear.

So I think it looks rather nice. 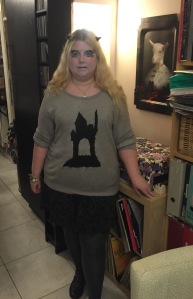 I found the sweater in a charity shop and added the appliqué of a castle myself out of the same sweatshirting I used for my last project. It took about 45 minutes in total. The sweater has big black bows down the back of it that were part of the original design also, so not totally plain. The skirt is this one I made a couple of years ago, it is still holding up well.

My makeup is one coat of Illamasqua white foundation, a few rhinestones stuck on with eyelash glue, and this stuff (round my eyes) called Face Lace. I am actually a bit of a convert. I was out shopping with my Mum on Wednesday and I walked past, and therefore into Screen Face in Covent Garden, and saw this and had to have it, Face Lace is basically a sticker decal you stick on your face to look like what goths used to do with eyeliner, except this is far far easier and gives a much smoother look.

Everyone at the gig thought it was really cool, & kept asking me what it was and stuff, & I am definitely going to buy some more for the future. Schemes. :->

Actually the gig was awesome, we missed the first band cuz the bus driver was being a pillock, but there was a Buffy themed band singing songs about stuff that happened in Buffy, a riot girl band singing really squeaky screamy stuff that sounded like Le Tigre (always a plus) and a straightforward rock group, who were really tight & had really catchy tunes.

& 90′ & 00’s cheese dj. OMG 90’s & 00’s cheese, I have missed you. As most of the crowd was people in their early 20’s who must have been 8 or so when this stuff all came out, it ran more like an 80’s night when I was a student than some middle age man doing wedding disco stuff. & it was wonderful, actually made myself throw up I was moshing so hard to the Buffy theme tune. Tried semi successfully to remember the dance routine to Tragedy, & screamed along to Evanescence, Britney & Bwitched. So much fun.

They put a regular dj night on. I might have to get this whole dressing like a normal/fashionable person thing nailed.

Seriously though, it might sound like Im being supercilious, but I’ve been aware my wardrobe has become a bit dated and a bit detached from everyday stuff I get to do for a few months, I’m actually glad of the opportunity to sort it out. Theres no point in having a wardrobe full of old fashioned goth and frilly lolita if I’m never going to have the opportunity to wear it. & I really like modern Strega and pastel and nu goth styles, & its getting easier to buy suitable pieces in plus sizes on the high street, & I’m actually really proud of what I did to that jumper, even if it was super easy. I’m actually quite looking forward to having stuff that looks a bit more fashionable.

OMG though, fashion revelation of the month though. Remember in 2005 when all those victoriana, high necked tea dresses in creams and pinks were in fashion? A load of the younger girls were wearing that stuff again in a clearly picked up from a charity shop kind of way. Obviously I take note of the “If you were old enough to do something the first time around….don’t go there”rule, and actually I think this is the first time it has properly applied to me as the whole grunge thing I was about 12 when it happened and not allowed to choose my own clothes 😦 so I wasn’t really there for, but at my parents I have a whole attic full of mid 00’s victoriana tea dresses that don’t fit me anymore that probably I should dispose of. It would look a bit anachronistic if I lost weight and tried to wear it again. On a 21 year old however it looks cool as anything.

Anyway, next part in the plan for updating my wardrobe is the black velvet skater dress, which I really ought to get on with. Hopefully tomorrow. Or something :-S