So having raced around like a highly energetic person over Christmas I’ve been pretty much in bed for the past week and a half, (including today meh!) however I had  couple of hours of energy yesterday to make a dress, and with this dress luckily 2 hours is all it takes.

Its another version of the Coco Dress by Tilly and the Buttons. The first one I made is here. With the first one I was a bit unhappy about the fabric I used, a non ironable, heavy synthetic black piece that has given no end of trouble since I made it, & although I liked the pattern, it bagged a bit funny round my waist and made me look a bit fatter. However not having to/being able to iron it has meant it gets through the wash quickly, I have had a lot of wear out of it, and its the middle of winter, it has finally got cold & I seem to be in desperate need of midwinter dresses as for whatever reason I’m not really in the mood for trousers and multiple layers as much this year. So I thought I’d give it a second go.

This time I used more appropriate fabric 🙂 and it has worked a treat. 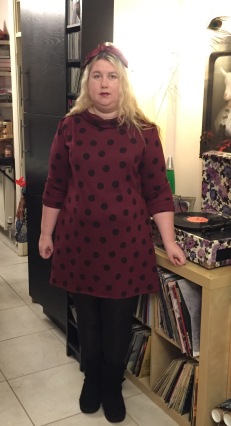 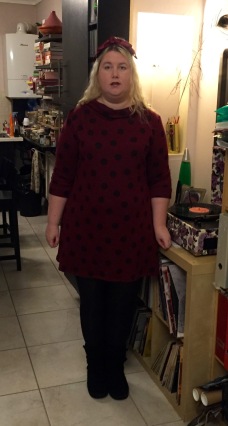 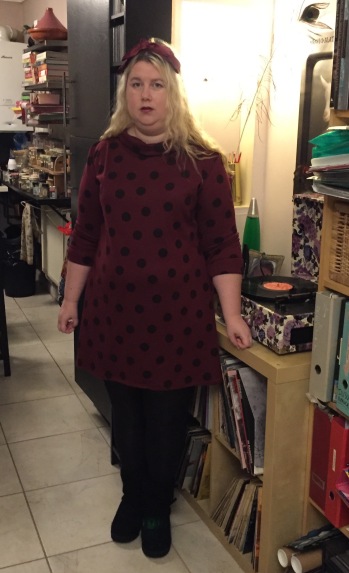 Crap indoor pictures aside (its reached the time of year that even if there was daylight for Jon to take photos apart from on weekend, its far too cold to be posing outside anyway) I think this one has worked out much better. The jersey is unidentifiable £3 a meter sweatshirting off the fabric stall, but it drapes really well and is really comfy and I really like the colour. I think having a more drapey fabric makes the dress look better. Its hard to tell from the pictures, but I’ve also added the cuff detail from the pattern rather than leaving the leaves plain. I think this one is going to need ironing though 😦

By the way, if anyone reading this is fairly inexperienced with sewing and wants a really nice easy project to start them off, I’d highly recommend this, apart from having to use zigzag stitch cuz its jersey, & choosing the right weight of sweatshirting, this is a really really simple project to make.

Anyway, assuming I stay awake for more than a couple of hours each day next week, my sewing schedule involves an underskirt for my Versailles Rose Bouquet Lolita dress, I have got it to kind of fit now, but it is much too short by itself. And an attempt at Jennifer Lauren Vintage’s Bronte Top, basically cuz the theory is I can make them both without changing the thread in my overlocker. However my overlocker is playing up at the moment and constantly dropping one of its threads, so hopefully :-S