I think one of my recurring problems with sewing and knitting is that it takes so long between conception of a garment and actually finishing it, that sometimes I have no idea what to do with it once I’ve made it.

This was pretty much true of my latest creation. A scarf started about this time last year and finished two weeks ago. It was a good six months before that I had the idea of making it in the first place, having had a drink or two one night and deciding to google animal print yarn; to my slight shock, given the amount of fair isle self striping yarn there is around, no one was really making very much animal print. Except for Stylecraft who had made a brilliant (though somewhat acrylic) range called Safari, which sadly had been discontinued in 2012. So I decided I really needed the tiger print version, so set up an eBay search (which I now don’t know how the hell to take off, nearly two years later) sat back and waited. Six months later it succeeded and I became the proud owner of 8 balls of tiger print wool.

So its taken me ages to knit this particular scarf, largely because I was using it as an easy project I could chat through whilst I was at knitting group, which was only twice a month, and working on other stuff at home. & by the time I finished it I was really quite sick of it. The tiger print yarn, although really pretty is so acrylic that its actually quite unpleasant to the touch to knit.

& I didn’t really know what to do with it, my winter coats are bright red and pink (not really my choice, its what was available in the shop that fit, & a present from my mother) so teeming them with tiger print seemed a bit garish, its something I’d have done in previous years, but not really me now… 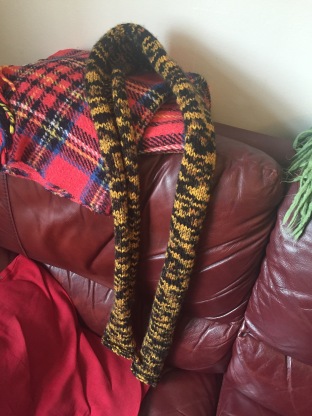 Here it is over a bright red blanket and sofa to show what I mean.

So I put off photographing it as I wasn’t sure, & then the weather started getting warmer, & it wasn’t really scarf appropriate anyway, except I decided I absolutely needed photographs, so I somewhat randomly teamed it with my green jacket and a black dress just to get it done, went out to take them, and then was just blown away by what I saw when Jon showed me the fist couple of photos, its accidentally cool! 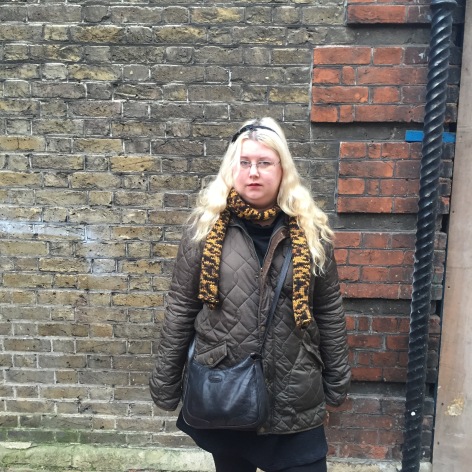 In many ways I’m such an idiot, I was a massive Manic Street Preachers fan when I was in my late teenage years, so I should have known khaki and animal print really go well together, but until I saw the first photo Jon took I hadn’t realised my scarf could look urban and cool rather than just a bit kitsch.

So now I’m desperate to get the matching hat done. I had 5 days at my parents over Eater and I was planning to make a good start there, however I stupidly brought the wrong length circular needles with me (so can’t be bothered to do the entire hat on a magic loop) so I did a jigsaw instead.

Hopefully I will get it started in the next day or two anyway. 🙂

So the first mention of this I can find in my sewing queue is back in October 2014  It reappeared in my sewing goals for 2015 but completely failed to happen. So now in March 2016, may I present to you, a bright red Renfrew Top….. 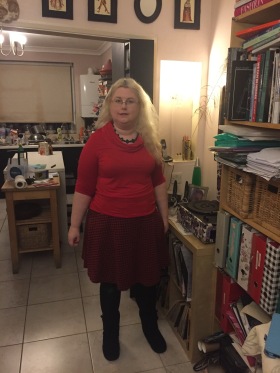 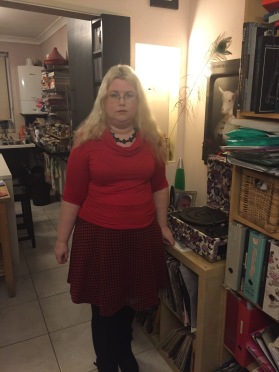 So this has been in the works a very long time, I made the skirt it is pictured with back in February 2014, and swiftly realised that although it works brilliantly with black tops, for variations sake a red one would be nice. I got the jersey in Rolls and Rems in Lewisham a few weeks later. It was a bit of an impulse buy, & one largely driven by laziness as I wasn’t feeling the idea of going shopping up Goldhawk Road, & buying plain jersey on the internet has been decidedly hit and miss for me (well at the prices I’m prepared to pay anyway). So it was £5 a meter, which was a bit more than Goldhawk Road would be, but given I didn’t have to pay train fair or lunch, I figured it worked out. At the same time I bought some burgundy jersey which ended up being this and this. Immediately I got it out of the shop into the sunshine I realised I’d made a bit of a mistake, what in fairly gloomy light looked a slightly darker fire engine red, turned out to be bright orangey tomato in daylight. The quality of the fabric wasn’t quite as good as the burgundy either, its not bad, but its not top quality either. So I sat on it for a few months, & then stuck it in the washing machine with some slightly pinkier red dylon. It sort of worked. Its not much darker now, but its taken the absolutely glaring edge off it.

So yeah, it went in my sewing queue and then just kind of stayed there. I was still a bit unconvinced I guess and would rather sew stuff I was 100% sure about.

Till a couple of weeks ago, when I realised I had a major shortage of basic tops, red became even more of a priority gap in my wardrobe, & I saw something about Pantone colours suggesting that tomato red is going to be a big thing this year, & I thought I really ought to get round to it.

There was also going to be a frilly version in this style, which I’ve made several versions of over the years. But I’m kind of not as into it as I was, they are a pain to iron, my style has simplified slightly, and its not a colour I could ever envisage myself using for lolita, so I’m leaving the rest of the fabric for now, & having a think about what to do with it at some point in the future.

So I’m reasonably pleased with the top I’ve made anyway. Its still not my ideal red colour, but its a useful basic to have. I’m planning another one in grey, but I had to wait a week or two before starting it as I was waiting for the overlocker thread I ordered to turn up, & now its Easter, so I won’t get started on that for a week at least.

I have been doing some knitting and some embroidery though, so hopefully I’m keeping some kind of momentum up.