So I didn’t think I’d done great this year, but apparently its one better than last year, when I managed 10 items of clothing and no total flops. Of the stuff I made last year everything has been worn multiple times except for the Regency dress. But I have not been able to start Regency dancing again, even though the trains are running again in the last 3 months we’ve been too busy, & pretty much all the gothic fancy dress parties have died in London. The Goblin King was cancelled and White Mischief is ending on New Year, so there really isn’t much opportunity at all to wear that kind of stuff at the moment. I know times move on and what is counted as alternative changes, there is now an amazing feminist punk & riot grrl scene round Peckham and New Cross, and the Crusty/Gap Yah/hippy scene seems massive at the moment, so there really is plenty to do, but I am going to miss big dress up alternative parties, it was a style I was very into and I enjoyed sewing for them. There are several big steampunk or fairy or goth festivals outside London still though. I will not have a chance to go to any next year, but hopefully all my goth/fancy dress party dresses won’t go to complete waste.

Looking back at what I actually wore out of my 2015 makes though and what I made this year has made me think about what I actually intend to make next year. In January I may well finish my Lolita xmas dress, it has been on the go for 3 years now, the first year I bought the fabric but couldn’t find appropriate trimming, last year I cut out the fabric and then promptly hit a massive creative block and ran out of inspiration. This year I worked out exactly what I wanted to do with it, got sewing and was doing really well, until I got the evil flu of doom that has been doing the rounds this year. That was about 6 weeks ago now and I am still not well (I’m writing this tonight as I was supposed to be at a party, but I’m not feeling up to it, so I’ve packed Jon off without me and am using the time to do quiet things.). If I don’t feel utterly sick of Christmas when Jon goes back to work in January I will finish the damn dress so it doesn’t roll over another year, but after that I have a bit of a ban on the goth and the Lolita and the steampunk for the rest of the year, my wardrobe is well developed enough, and there is no damn point making things if you don’t have the opportunity to wear them. 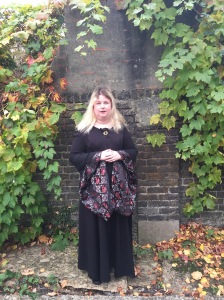 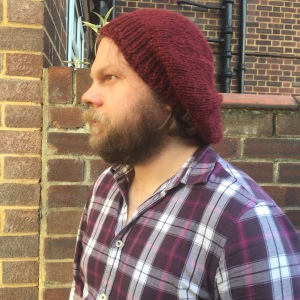 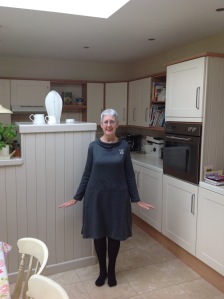 So of that there are no obvious flops so far. The Burgundy hat I made for Jon has stretched a bit. He still wears it, but it is not ideal, so at some point in the next few weeks its going to get chucked in the washing machine at 40 in the hope it shrinks a bit and doesn’t die in the process. So that might become a flop if it doesn’t work.

I am also still a bit unconvinced about the Colette Patterns Moneta Dress (The grey one with the big neckline) I have actually worked out how to wear it with a cardigan and my boots for winter and it looks very good and grungy layered. However I still think the fabric is awful and it now has a small patched up hole in it on the waistline where I tried to fix the whole elastic gathering thing not having worked as well as it should, and of course its such crappy fabric a tiny hole stretched right away. This has actually worked out ok, as I now wear the dress with a belt which looks so good with it, but I am not sure how much love its going to get next year. I have bought some wider and more expensive clear elastic though, so I can have another go with the same pattern but better fabric next year.

The Jennifer Lauren Vintage top has massively grown on me. I thought it was too young for me but its been on constant rotation with my other long sleeve tops in the washing and I’m even contemplating making another one. I would modify the bottom however as the riding up thing still annoys me and means its no good for layering in winter.

So yeah, next year I’m pretty busy. I’m going to the Sci-fi weekender in March, and have one thing to make for Jon although everything I wear will be pre-existing outfits.

Then two of my friends are having their stag/hen do and getting married in April, so I very much doubt I will have the energy in those months to do any sewing. September is also very much a write off as we already have a family event booked.

Around that my plans are:

Finish the bloody Xmas Lolita dress once and for all.

A black Tilly and the buttons miette skirt

Another Tilly and the buttons coco dress, this one in yellow with beetles on it.

Two more of my favourite 1940’s dress pattern, one in the black cactus fabric, and one for a special occasion.

After that I’ll see what I feel like, though the obvious gap in my wardrobe this year was casual dresses for the middle of summer. That doesn’t sound like a lot of pressure, but Jons costume needs to be done for the end of March, and the rest are all needed as soon as possible, so I can’t really slack off too much.

Anyway, I am getting tired again now, so everyone have a VERY HAPPY BOXING DAY AND LOVELY NEW YEAR,and I am going to go back to sulking on the sofa with a glass of wine and box of tissues!  🙂

I finally have my actual computer back! 🙂 I installed a new hard drive all by myself and got it loaded up again with everything, and it works, & I am so damn happy, as finally I can do stuff like clear out my emails properly and post on here without worrying about my phone app crashing every 5 minutes. I am less happy about the fact all the iPhoto photos on my external hard drive are no longer compatible with the version on my laptop, so I still might have to take it in to the Mac-store and get someone to sort it after all. But you can’t have everything I suppose. 😦

Anyway, apart from burgling my computer. I have been away for a week and then came down with the inevitable lurgy for this time of year. So I’ve been permanently under the weather and haven’t done much sewing.

However I decided to go for a walk to Lewisham this morning to get a bit of fresh air and exercise. As well as me being ill, London has been freezing cold and polluted as hell lately, so I haven’t got out much.

This may have been a bit of a mistake for my bank balance, though I am really happy with what I’ve come home with.

Back in summer they had some cactus prints in and posted on Facebook about it, but I was ill that day, & by the time I got down there the next day they were all gone. I wasn’t that gutted though, cuz they were all on a white background. & me and white fabrics aren’t best friends.

But today I picked this up:

The lighting makes it look a bit shinier than it should, but it is black, & covered in cacti  and succulents. I’m not quite sure which pattern to use with it yet, but I am dead excited by this. I need to use it soon though as it is excruciatingly hipster at the moment.

Oh yeah, I also picked up some grey jersey and a pretty floral fabric to add to the general stash (I don’t know why I do this, I am so badly out of room to store the damn stuff!)

Then I went to Tiger,

I was tipped off about Tiger being amazing for Christmas stuff last year, but then I didn’t make it there till after Christmas, and as they change their stock immediately afterwards and don’t have a sale, missed out on the pretty stuff completely. Seeing how much I bought this time round, maybe it was for the best!

Clockwise from the top

They have been doing stuff with the stags on all year, & I loved it, but this is the first time they did a tray that was actually a sensible size, so I snapped it up.

The small thing with a stags head is a felt fridge magnet, it is so damn cute, & I needed another fridge magnet as there is a particularly large Japanese takeaway menu that isn’t properly stuck to our magnet board at the moment. So for that one at least there was an excuse.

Which is more than I can say for the gnomes, they are apparently paint it yourself, but I think I might leave them white to go with our bedroom decor. I have no idea why I bought them really, except they were £3 and there is a female gnome, I have a real thing for female gnomes.

The two boxes of small mushrooms are supposedly for putting on the tree, but I’m not sure, I might keep one of them for craft projects, I can see them going really well with a fairy wreath.

Talking of which the four wreaths at the bottom are actually for round candle sticks. They have mushrooms and berries on them. I have four lovely black candles I stole off my brother earlier in the year, that will go with the wreathes very well but I don’t have nice candle sticks to go with them yet. I’d really like old fashioned brass ones.

The grey man at the front reminded me of Gandalf, which is a good enough reason to buy anything.

And lastly the mushrooms in pots. They are candles apparently! I just thought that was adorable!I love fly agaric mushrooms and I love candles so its a perfect match. there were cactus ones as well, but apart from obviously I am going to have a dress, I’m not that into cacti as a hipster thing (we tried recently but they lived about 6 weeks) so I left them behind.

There is also loads of craft stuff for kids in Tiger at the moment. I had to stop myself coming home with about 3 different types of toy weaving looms and one of those knitting dolls, but really we do not have the space.

Anyway. instead of buying stuff I need to get on with making stuff, my xmas dress is halfway through, so hopefully that will be finished in then next two weeks. I don’t want it to go over to another year!