Back to blogging the stuff I made before Christmas but did not get round to posting about – actually for some reason I went completely nuts with the sewing in December and made three things so there’s a good reason I didn’t blog everything in time. I am having a massive break from sewing at the moment as Jon had 2 weeks off work, then we were dealing with the house move – it’s fallen through, I’m a bit sad but the amount we were being mucked around it’s totally for the best. And now Jon has come down with a cold so he’s been at home for most of the week and today is his first day back at work, so I’m using it to catch up on admin jobs and hopefully will be back to the actual sewing next week.

Anyway, back to the dress….so the idea for this particular dress came from two chance happenings coming together simultaneously.

The first is that I was down the fabric stall on Lewisham market looking for a specific shopping list for some long term projects, and while I was there Maggie, the lady who owns the stall, tipped out a new bag of fabric. – She sells deadstock and samples from some very well known high street stores and independent designers – which is how I get such gorgeous stuff off her- and anyway, some of the stock comes as large bags of random from the high street clothes companies workrooms. So this particular bag there wasn’t actually very much of interest in it, it was mostly very small pieces, apart from a 4m length of the most beautiful leopard print jersey. So I had it off her pretty much before it even hit the stall.

Then I got an email advert from John Lewis with a really nice but very simple polo neck leopard print jersey dress by Ghost selling for like £95!!!! I took one look, sniggered and knew immediately that I could make my own version with pattern pieces I already had in my stash and the £12 of fabric I’d just picked up off lewisham market! 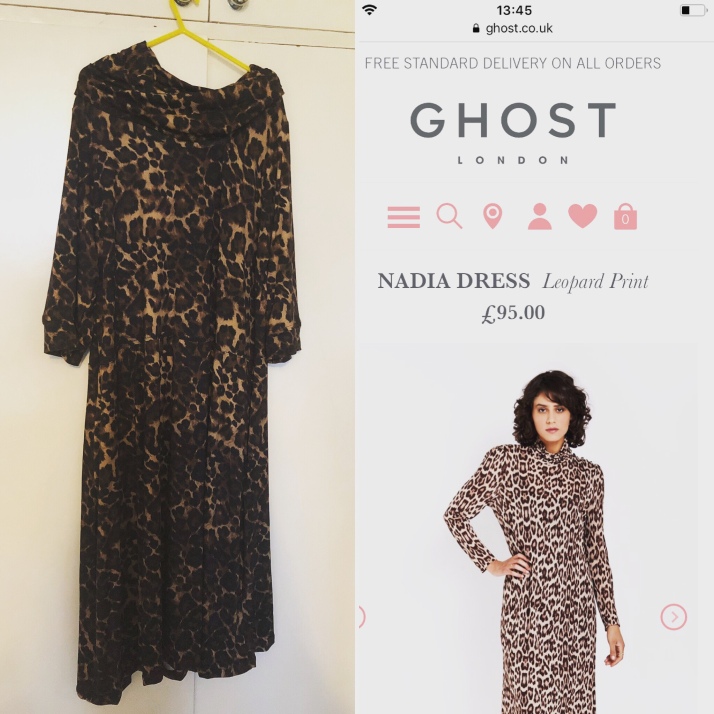 So of course because it’s my version it has a cowl neck rather than a polo neck and it has 3/4 length sleeves rather than full length ones, but for £12 I’m rather proud of it.

The pattern I used was a mashup of the Sewaholic Renfrew Top and the Colette Patterns Moneta dress . I’d love to say it was my idea but I’ve seen several people do it on Instagram so I just ripped off the idea from there.

I’ve made literally dozens of the Renfrew top over the years so it’s a pattern I’m very comfortable with, I only made one Moneta dress in the past and it was a complete utter disaster , I used a crappy cheap jersey, the neckline stretched out of all recognition and I didn’t get on well with the weird elastic gathering method of constructing the skirt. But that was two and a half years ago, my sewing has massively improved since then, I was using a decent quality jersey this time and I totally ignored the instructions for the gathered elastic, gathered the skirt using two rows of long machine stitch (ie my usual way) and attached the elastic to the bottom of the bodice instead.

& I think it’s worked wonderfully. My one remaining gripe with the Moneta is the skirt is not as full on the plus sized versions as it appears to be for thinner girls. But I love the fact it has pockets – a sad omission on most women’s ready to wear dresses- and I think what I’ve ended up with really suits me. I now have plans for two more in different jerseys I have in my stash.

So onto the pictures….

We took these on the balcony of Jon’s brother’s block of flats when we went over for an early Christmas celebration.

I’m particularly pleased by the way the gradient stripe lines up between the bodice and the skirt, because it was completely unintentional and it didn’t even occur to me to try pattern matching, so I’m really glad it matched itself!

It pretty much hasn’t been out of the wash since it got made. I’ve now set up an entire Pinterest board to stalk top end highstreet dresses, as clearly this is an inspiration method I completely need to be trying again.

So actually I’ve been quiet on here, but fairly busy with sewing.

I’ve finally finished my Colette Patterns Moneta dress. I’m reasonably impressed, it was easy to sew and all, and this being my first time making it I followed the instructions pretty much to the letter.

However I was much concerned by there being no instruction to stabilise the neckline. & indeed the neckline on mine is somewhat lower cut than on a lot of the versions on the internet (though it does seem to be more of an issue with the plus size pattern range looking at peoples photos, than with the standard sizes.) If I make this again I’m going to have a good look round for pattern hacks on the internet for ideas how to stabilise it better.

Part of the issue may be the fabric I chose though, the jersey I used was terribly soft but somewhat drapey and stretchy and a little bit see through. One of the things I’ve noticed about high street clothes over the past couple of years or so, is that since cotton prices went up a few years ago, instead of putting prices up the way you’d expect them to, the stores have shifted to using slightly thinner cotton in their jersey fabric. this is noticeable on the street, but also on the local market store, as they get samples from the hIghstreet stores design studios. Luckily I have a massive stash of all different types of jersey some going several years back, but the piece I used for this dress is a tiny bit thin and stretchy for my liking, and that reflects in the low neckline.

I actually quite like the neckline though, it looks deliberate and super off the shoulder necklines are in fashion right now, so its really not a problem. 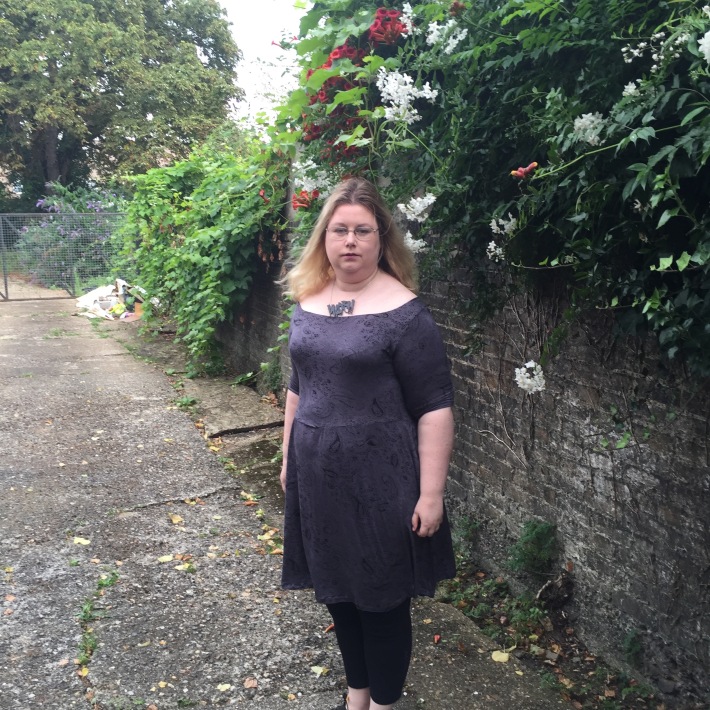 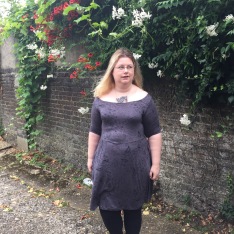 The necklace in the photo is  from Curiology & says Witch. Their site is down for a few weeks at the moment, so I can’t add a link, but I am completely obsessed with their jewellery, I have three pieces. I love the fact they can make an fairly normal outfit instantly and casually goth.

The other thing I made this month was a dress for my Mum for her birthday. She really liked my versions (here & here) of Tilly & the Buttons Coco dress, so when I found some grey sweatshirting down the market stall, I thought it would be nice to make her one as well. (It also helped that there was a sale on some of the patterns, so my Mum has her own custom size one now, which is just as well as she goes across 3 sizes, which is a nightmare!)

Anyway, here it is, hanging on the door of my wardrobe before I sent it to Mum, due to the continuing heatwave I haven’t managed to get any pictures of her wearing it yet. 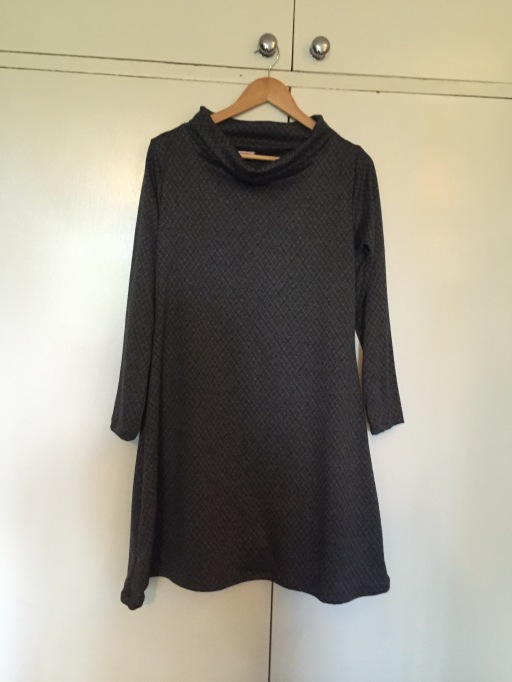 Anyway, future sewing plans are somewhat up in the air at the moment. Looks like there will be a winter version of the Goblin Kings Ball, we may well be going to the SciFi Weekender next year, & I’m determined to actually finish my xmas lolita dress, so theres lots of fancy sewing coming up, in amongst the less exciting but still necessary job of padding out my everyday wardrobe. So I’ve got a schedule again. & I really need to be getting on with things. Eeeek!