So this week, after several weeks of spluttering along our computer died. This has put me hopelessly behind with blogging, added to which the things I am about to post I’m late with anyway.

First Sunday of the month there is a market now on Catford Broadway, it is actually rather good. I bought stuff…..

I got this bath bomb and the ‘robot’ lego man soap from Bubblylicious who make amazing novelty bath stuff. They are really good quality and smell amazing, and are GLITTERY!!! which is awesome, and even more awesome as I needed to do a trip up to Lush in Bromley and that saved me the effort.

bought this passion fruit cupcake from a cake stall, and this slightly revolting looking, but absolutely gorgeous tasting sicilian sausage from an Italian deli stall…..

the deli stall was a bit expensive though, even by Borough Market standards!

I also meant to post pictures of the dress I made last week several days ago….

I think its really pretty. I used New Look 6457 as a pattern, which is rather unprepossessing on the packet, but I saw several impressive looking versions on other peoples blogs so thought I’d give it a go. This is technically a wearable muslin as I was trying to get the fit right, as usual with Simplicity/New Look patterns I had to go a size down from my uk ready made size and nearly 2 sizes down from what they reckon is a good idea on your measurements, so its a bit messy inside. However it was super easy and took a day to make and only takes 2m, so I have a load of Liberty print fabric I am going to make into these and I am going to have a go at converting one into a lolita style jsk (I’ve seen a few people on the internet do that successfully too!) I used this  alexander henry fabric, which has Frida Kahlo all over it and is so cool!

About the picture…I am aware when I post pictures of sundresses I am trying to make the dress show as well as possible, which means showing my arms in the photo. I have horrendously fat arms! I have 2 weight causing medical conditions and a muppet of a doctor managed to give me meds that doubled my weight about 18 months ago and I haven’t taken it off yet. I am not sure whether seeing my arms being fat detracts from the dress looking nice or not? I know it shouldn’t, but I’m also aware that pretty people do make clothes look nicer (though not nececarrily size 0 ones!).

Anyway, this is how I’d normally wear it (and indeed was the day the photo was taken) with a cardigan or sheer blouse in hot weather, which I thinks looks better, but you can’t see how the dress works properly, so I don’t think its any actual use!

In other sewing news item number 2 I was trying to sew this month is finished now, but I can’t go into what I’ve made yet.

Item number 3 has stalled somewhat as I’ve had to sort out the computer instead this week, so I am a bit behind! 😦 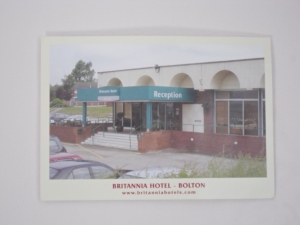 This is a postcard that Jon was given by the Britannia Hotel in Bolton where he stayed on work business recently. Isn’t it brilliant! It is on our wall now. I am hoping to actually start a collection of similar unlikely postcards to go with it! 🙂