I don’t usually make home decor stuff. The last time I made cushions was several years ago, and I wasn’t very adept at it, zips looked sloppy and the finish wasn’t very professional, but our collection of cushions over the years had been getting rattier and rattier and we’ve been seriously delayed moving house, so I needed something to re-engage me with our flat, so I decided to give cushions another try.

Now near my parents in Chipping Campden in Gloucestershire is a shop called Sam Wilson Studio (website here ) where the lady who runs it (Sam Wilson obvs) designs the most beautiful folksy rural screen prints which she prints into fabric and homeware. My intention when we got a new house was to splash out and buy loads of stuff from her, but it would involve saving up as her stuff is very expensive and we don’t have room in the flat for more stuff right now.

However when I was in there earlier this year, just to browse wistfully really, I spotted two pieces of two of my favourite fabrics as remnants, one was 90cm and one was a meter and they were cheaper than usual, I can’t remember exactly how much, but the materials including backing and zips for the entire project came to about £100, so I’m guessing about £30 each. And the fabric amount was small, but the pieces were really wide. 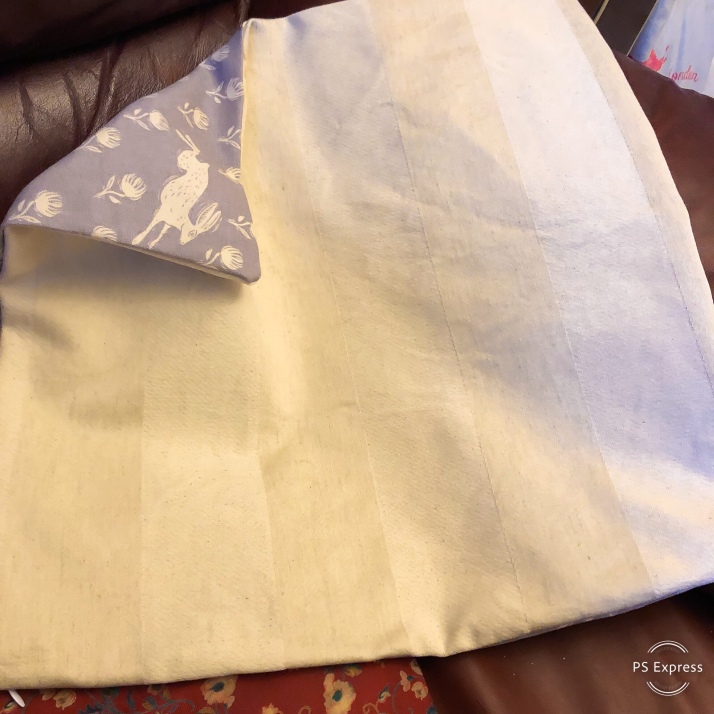 The fabric I used as a backing. 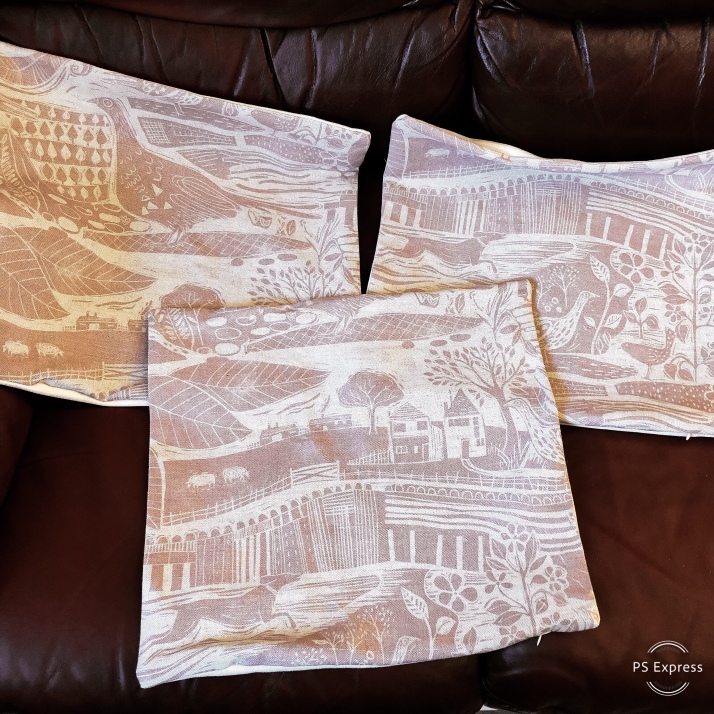 Three of the pink ones – I didn’t get photos of all of them together. 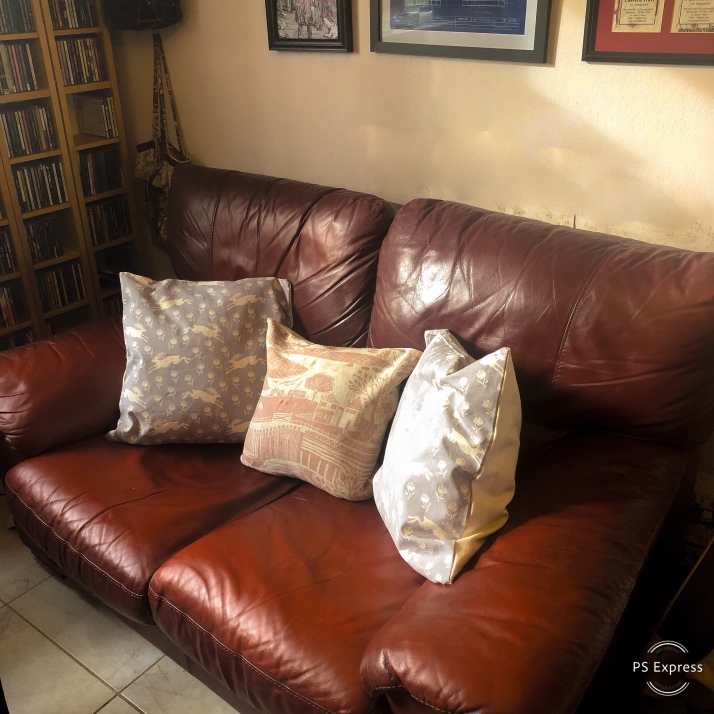 And the 5 we are keeping for us on the sofa and chairs in the living room – excuse the dodgy photoshop job on the wall behind the sofa, it needed a new lining paper at the time and what was there before I blurred it out was even more distracting.

So yeah, we’re keeping 5 for our sofas. I bout the cushion pads of amazon and they are dreadful. I am really pissed off actually, cuz they will need replacing very soon and it’s such a waste. I have since been reliably informed by someone who does this semi professionally that apparently Dunelm Mill is the place to get cheap decent quality cushion pads. We have one very near us, so at some point I’ll go there and replace the damn things.

The other 6 are going to be given as gifts at some point. & I am really happy. All told the materials cost £100 which is a lot of money but I got 11 functional cushion covers out of that, and finished ones very similar retail on the Sam Wilson website for £40 , so it’s actually a massive saving , & if I’d spent the same money on finished cushions I’d only have afforded two and a half.

Anyway, I am still unable to sew because the flat is still up for sale 😢 We are going anyway whether we sell or not in a couple of months as we can just rent the place out, but it’s most frustrating. Typically at the point when I haven’t got access to my machine a ridiculous number of my clothes have given up the ghost and need mending. I’m also reasonably well at the moment so I’d welcome the occupation.

btw: when I’ve previewed this it’s coming up with some weird bullet point thing. I have no idea where that cane from or how to make it go away. It isn’t showing up on editor so I’m very sorry I have no way of fixing the formatting.