So ok, it’s taken me a terribly long time to post this, but I have actually been making quite a bit of stuff (just not posting about them)

But here are three little embroidered animal decorations I made a month or so ago out of a kit in Mollie Makes….. 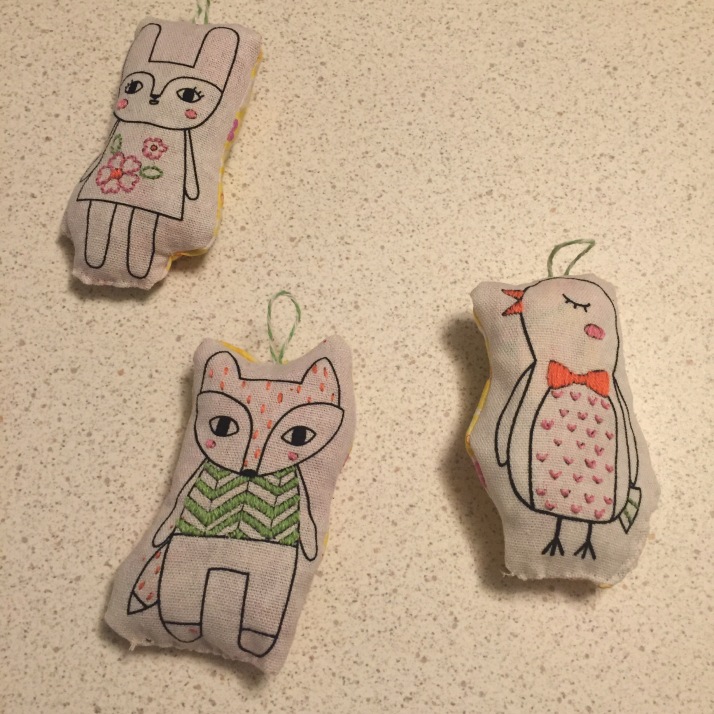 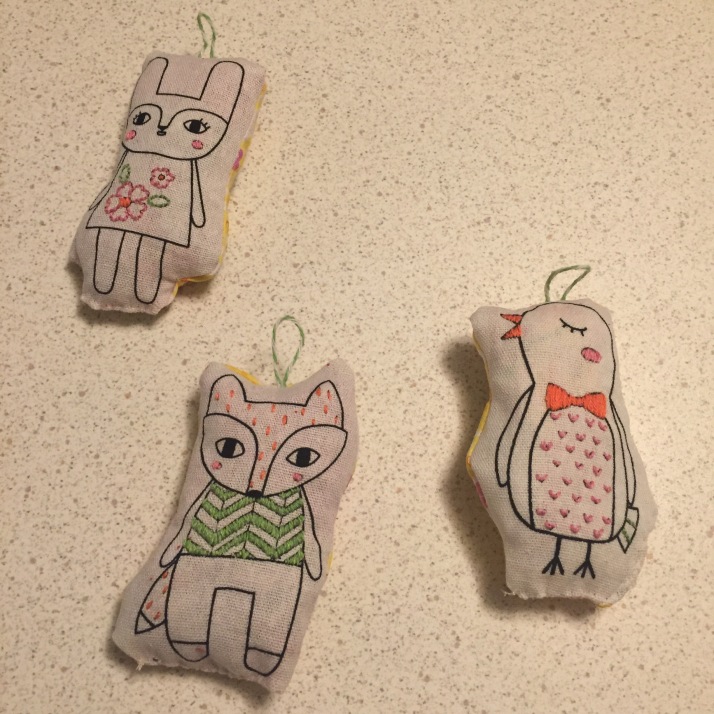 The kit had the animals drawn in in black lines, so all the coloured bits are my embroidery and then I sewed up the edges and stuffed them.

The stuffing is quite random actually, I had no actual toy stuffing anywhere and couldn’t think where to get any in a hurry since our local branch of Smiths had closed. So I used the scraps from my overlocker and the scraps from cutting out the fabric round the embroideries. I think it’s worked rather well.

I am also quite proud of my embroidery, even though it is very simple. It is the first time I’ve embroidered anything since primary school!

I went to a rather old fashioned girls prep school for my last two years at primary school. We had a mint green 1930’s style uniform, wooden desks with lids to store our stuff in, & an embroidery teacher. She  was meant to be teaching art, but because the classrooms were small and didn’t have sinks in, she had to teach stuff that wouldn’t make a massive mess.

So we learnt sketching and watercolours, simple woodworking and lots and lots of sewing.

I made a sampler into a work basket lid, which I still have, though it lives in my parents attic & we did embroideries of a flower garden which were made into a needle case for my mum.

Looking back I am quite impressed that a ten year old made that kind of thing, but I was always aware mine was a bit scrappy. I wasn’t great at selecting colours, my best friend at the time had a mother who was a seamstress and was always that bit better than me, & I could never get the hang of satin stitch at all.

After primary school I never really had the chance to try it again, so I walked away, not thinking I was complete shit at it exactly, but that embroidery was quite hard and probably wasn’t for me.

Recently though I’ve been seeing all the beautiful subversive and artistic modern stuff going round the Internet and have been looking for an easy way in to give it another go.

So trying it as an adult I found Satin Stitch a lot lot easier. & I found the whole process so relaxing! The finished products have gone to live with my mum as they match her kitchen decor perfectly.

I know it’s only a baby project, but I’m quite excited at the idea of trying something else, & am currently looking for a slightly more advanced kit that sparks my interest.

I have a couple of projects queued up that I haven’t got round to posting about yet, so my blog shouldn’t die entirely. But at the moment I have become totally unexpectedly ill  with my mental health issue and I’m currently recovering in the countryside so the only creative stuff likely to get done at the moment is my knitting. However that is progressing rather faster than normal, so hopefully I’ll still be making things, albeit not sewing for a while!

I made these a few weeks ago, but totally forgot about them till today, when I bought this months edition of Mollie Makes, but these are the pinecone Xmas decorations out of last months edition…. 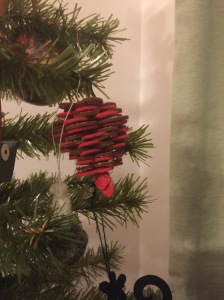 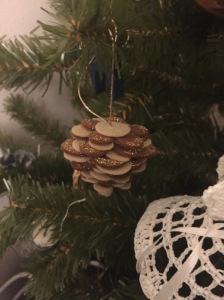 I am quite pleased with how they turned out, they look reasonably enough like the cover photo.

Although these were very easy to make they took a while as putting glitter on either side of the brown felt pieces meant leaving them to dry overnight twice.

I was also massively hindered by having not realised I’d run out of bead/fabric glue, so all I had was PVA, which worked, but it was much more of a pain than it would have been if I’d had the right stuff in the first place.

So anyway, I went to Lewisham today for a bit of a browse, & to buy Jon some new work shoes, & for once we went round actual shops instead of me just heading to the fabric stall.

So first up we went to Tiger. Now Tiger is a relatively new import into the uk, it’s a Scandinavian homeware store that’s kind of like a cross between the small junk section in IKEA and poundland, only it’s really cool. I buy a lot of ribbon there for craft projects as it is £1 a roll, only they didn’t have any in today.

However I did buy some very cool stuff.

First up these china dinosaur planters… 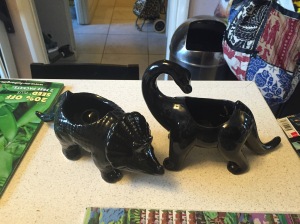 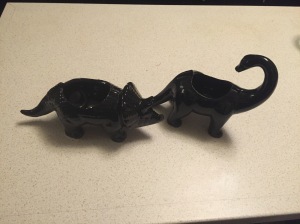 They were £4 each! Bargain! They are going to be filled with cacti or spider plants as we have a really bad indoor plant survival rate.

I also picked up this book of random cool printed paper 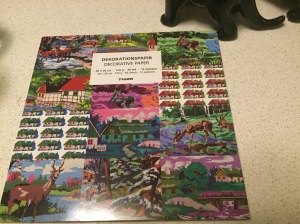 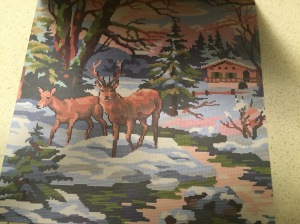 It has 12 different designs in it with several sheets of each. This deer one is probably my favourite, & they all look like cross stitch. I have no idea what the hell I am going to do with them, but they are really Mori Girl & vintage & I might just sit & stroke them occasionally.

I also gave in & bought an adult colouring book from Smiths :-s 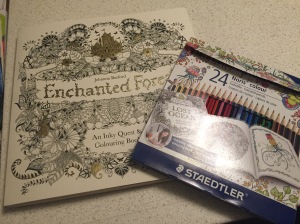 I got one called enchanted forest & so far I am very much enjoying colouring it in & the illustrations are all forests & castles & houses in toadstools so it’s very much my thing.

I thought they were not really for me, but I am currently trying all kinds of stuff to keep myself off the internet when I’m at home on my own during the day. I’ve lined up podcasts for when I’m sleepy & I’m buying magazines, & hopefully a colouring book will help too, well it’s worth a try!

Anyway, Jon & I are not going out tonight, we were intending on going to a hipster artists warehouse party in Peckham, but we are both tired, so we are staying in & listening to vinyls and drinking the odds & sods from the back of the booze cupboard instead. But whatever you are up to….