Finally got round to making the dress I cut out several weeks ago.

Partly this dress came about because I am skint at the moment and had all the bits to make it lying round, so it didn’t require any additional money spent, and partly because half my friends have Vivien of Holloway dresses and they are very expensive and I wanted one too, so I decided to make my own.

The style I decided to go for was this one… the kind of iconic Marylin Monroe dress, in a novelty print. Luckily I had the ideal novelty print from my favourite market stall (as documented here) . Its taken me a while to get round to it, as its kind of frivolous sewing and I had usefull stuff to make and I thought it would be a lot more complicated than what I normally make, which it was, though not half as bad as I expected.

The first issue was choosing a pattern; practically every fashion company now and in the 50’s has a version of this dress knocking around so there were a lot of options to choose from. I decided to go for a modern version as although there are actually patterns from the 50’s that fit me without alteration, it can be a bit hit and miss finding them, and I’d already worked out this was going to be a pattern needing boning, so I wanted it to be as simple as possible.

I ended up going for simplicity 3823  which doesn’t look anything like, but when I google image searched it, a load of lovely stuff came out including several plus sized attempts that looked the part perfectly. Also the other useful looking option was a vogue pattern, which tend to be a lot more complicated, and also I know how to adapt simplicity patterns for my size fairly well these days. Which is just as well really…..

On opening the pattern and inspecting it, I have no idea how one could practically make a mock up (muslin/toille/whatever) without making entire thing lining and all, as the bones were to be sewn into the seam allowances on the lining, so seeing as pretty though it is, the unicorn fabric was £2 a meter, which is a quid cheaper than the lining, and there is enough left over after making the dress to allow me to make something else, I decided to wing it.

As the sewing process progressed it got even more nerve-racking as it became apparent there was no point built into the sewing process to fit the thing as you went along. The first chance I got to properly try it for size was just before I put the zip in at the end!

So I went for a size 16, which is my usual size in simplicity, though a bit of a risk as my weight ballooned about a month and a half ago, and its only just beginning to come back down again. And a size 14 on the tits, cuz simplicity patterns always assume your knockers are enormous, but I enlarged it a bit across the back just incase.

Construction wise it was easier than I thought, I was really nervous as all the hard bits were at the beginning. Boning was a pain, but made much easier by ignoring their instructions to sew it into its casing immediately and I left it to the last possible minute, that way I got to adjust it for length and bending in the right direction before permanently sewing it in.

Oh yeah, and the fabric was evil, it wrinkled if I left it alone for five seconds so I was ironing it all the time, frayed like anything, and wasn’t overly keen on having stitches unpicked. 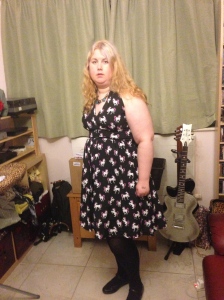 you’ll have to excuse my horrible arms in second picture, as usual when I put on weight it goes disproportionately onto the tops of my arms. I  have 3 medical conditions that screw with your weight, but to my knowledge non of them specifically do that to you. i have tried showing doctors and saying ‘this is wierd, help!’ but non of them seem to think theres anything abnormal about it. Anyway….

with a cardigan/bolero how I would normally wear it…. 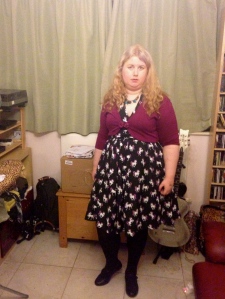 which looks much better I think. I am well happy I have a cardigan thingy to match actually. my mum bought it me several years ago to go with a dress for someones wedding I don’t think I fit into anymore, it has been sitting in the back of m wardrobe for ages, and its the perfect colour match for the unicorns.

I’m so relieved, it fits spot on, well ok, it could be about 2 cm bigger for comfort, but then the boning would be pointless. I think it is about an inch and a half too short on the legnth though. (will make it longer next time) 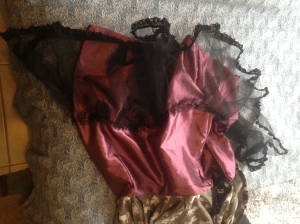 The underskirt has a built in net petticoat. Actually if I was making this again, I’d either leave the petticoat out, or use the skirt pattern to cut the pieces rather than use the petticoat pattern as although the built in net gives you a fairly nice everyday poof, the shape of the petticoat means you can’t put a proper net one underneath it, which would make it properly foofy. Its ok for now though as i need a knee length black net petticoat and can’t afford one at the moment, (and really can’t be arsed to make one…I hate sewing with net!) so this will do.

This is the neck fastener, it was actually a bit of a buggerup! I lost the pattern piece for making fabric loops to go round the buttons as it was tiny, so I used elastic I had lying around instead, but ideally the elastic loops needed to be smaller and thinner and they wouldn’t lie straight when I sewed them in, so I’ve had to use oversized buttons to compensate. I almost never have my hair up though so it doesn’t really matter.

We are going on holiday to Suffolk for a week on Sunday so no sewing. When I get back we will be finishing redecorating and reorganising the flat, and then I am going to have to get to grips with the overlocker. (unless I get bored and decide to make my Hello Kitty/Kiss dress instead!)

So I’ve been really quite busy.

Firstly..I picked this up a couple of weeks ago (£1.50 in a charity shop- nice!), but forgot to post about it,

The acorns are made of little bits of polished wood. It is so pretty, and very very Mori Girl!

Then I made a couple of long sleeved t-shirts…..

This one is a quick remake of a plain round necked purple job a friend of my mums gave me, it was too big and the neckline wasn’t flattering.

The unicorn was copied freehand from this colouring page and the lace is vintage i picked up ages ago.

I’m not sure about it, I think the neckline is too low, I didn’t actually cut it that bad, but it has stretched. i had the same problem with my cherries top I made a couple of weeks ago. It was the same kind of jersey too, the thick old fashioned sort rather than the thin modern sort, which I seem to be having no problems with at all. Does anyone know what i can do to stop this happening? I’ve stabilised the shoulder seams.

Also I made this for Jon…. 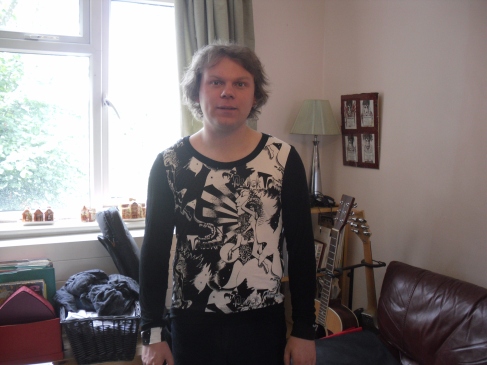 It is using the same sewaholic pattern as all the rest, which is technically a girls, but jon is going to wear it for goth clubbing and playing onstage with his band, so it actually works really well as a guys top for that purpose. It is the first renfrew top I have made I can say is pretty much perfect, there is nothing wrong with it at all, so I am really pleased! 🙂

So I already have a list of sewing projects taking over the flat, and then when I was out shopping in a local shopping centre (Which shall remain nameless, as this was too good a discovery) I walked past the £2 a meter stall, which I usually ignore because it is usually full of crepe style synthetics I wouldn’t touch with a barge pole and noticed it actually had a few interesting looking pieces on it…. 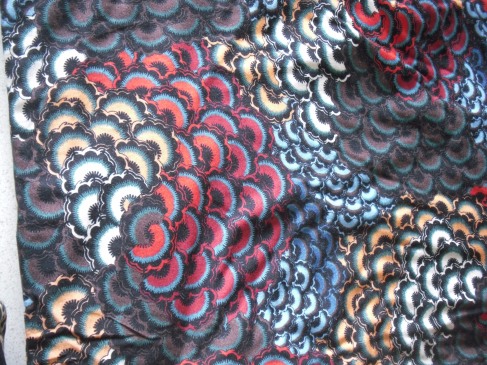 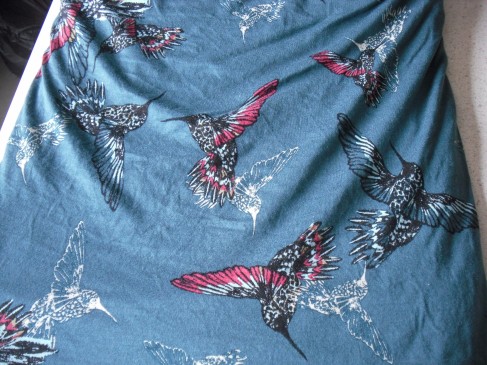 These three are all jerseys. I think I got 2 meters of each but in a couple of cases its a little more, cuz although the guy would cut it for you, there was no point if there was only 75cm or so extra in the piece.

This is some kind of gauze, which is more the usual stock of this particular stall, but it has pretty feathers on it! No idea what I’m going to use it for yet, but at that price I don’t really care.

And this is the find of the century….

About 5m of UNICORNS!!!! Sadly it is viscose, not cotton so is a bit shiny and see through and therefore better fro a Marilyn Monroe style Vivienne of Holloway knock off dress, rather than a Lolita number, but given I was revving up to spend 15 quid a meter on this (possibly if i could afford it) £8 for 5m of the viscose equivalent seems like a brilliant deal to me. The care label on it also says it is Japanese, so at least its quality viscose!

Apparently he got all this stuff cuz the samples department at Wallis were having a clear out. No idea what they would need unicorns for, but I am very grateful to where ever it came from.

Recently my sewing has lacked a bit of focus actually, but this month I have 3 actual deadlines for garments for the end of the month, otherwise I am going to have to go out and buy stuff, so given I have so much fabric to play with now its good to be forced to prioritise. I’m not going to say what the things are for incase I don’t manage them though! 🙂